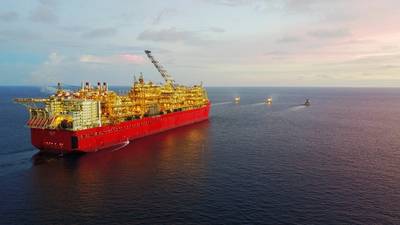 Trelleborg’s marine systems operation has supplied a suite of products to Shell’s Prelude FLNG facility, the largest offshore facility ever constructed. Prelude, which is 488 meters long, 74 meters wide, and made with more than 260,000 tons of steel, will extract and liquefy natural gas from a site in North West Australia.
Trelleborg supplied its gas transfer technology and SafePilot navigational and piloting systems for Prelude.
“Our SafePilot solution, SSL, ESL and radio ESD for tandem condensate offload have been used on Shell’s Prelude FLNG,” said Richard Hepworth, President of Trelleborg’s marine systems operation. “The products supplied fall under our SmartPort product range: they represent industry leading technology that enables real time communications and information sharing during vessel approach and the LNG, LPG and Natural Gas Condensate transfer operations.”
In support of Prelude’s process operations, Trelleborg supplied its Ship Shore Link (SSL) system for the transfer of LNG from the platform to visiting LNGCs. To achieve this, a full shore SSL system was supplied. In addition, Trelleborg also provided their Electrical Shutdown Link (ESL), known more commonly as the SIGTTO link, for Liquefied Petroleum Gas (LPG) transfer and a new radio ESD link developed with Shell used in conjunction with floating hoses for the tandem transfer of natural gas condensate produced as part of the LNG production process.
In support of Prelude’s marine operations, Trelleborg supplied the navigational system for Prelude. The system is designed to closely monitor the relative motion of the FLNG and the carrier during approach, and the sideways berthing/mooring phase, as well as a tandem berthing/mooring phase. The motion and position data of the carrier are measured by the Differential Global Positioning System (DGPS) / Globalnaya Navigazionnaya Sputnikovaya Sistema (GLONASS) RTK based Portable Pilot Units (PPU) installed on the bridge wing of the gas LNGC.
The PPU is an “all in one” unit with built in roll and pitch sensors. The CAT III unit is quick and easy to set up, as it only contains two GPS antennas and the PPU switches on automatically the moment the antennas are pulled apart.
Position and motion data of the FLNG is measured by the Motion Reference Unit (MRU) and the DGPS / GLONASS RTK based base station on the FLNG. The base and up to five PPUs are linked via a dedicated UHF frequency.
The offshore operation requires a precision approach, monitoring and mooring software for the offshore oil and gas industry. Through the SafePilot system, the pilot, master, tug operator and control room all have access to a real-time, accurate and independent picture of the relative positions and movement between the different objects and tankers in the operation. Trelleborg’s offshore software allows the ability to view all objects and shuttle tankers together, on a single display.
Trelleborg’s SSL and SafePilot solutions fall under the company’s SmartPort portfolio. SmartPort is Trelleborg’s answer to the need for a standardized way to collect and store data. It’s a technology platform that connects port operations, allowing users to analyze asset performance and apply data insights, to improve day-to-day decision making.
• Motion Reference Unit • natural gas • North West Australia
Email

Oil and gas firm Neptune Energy has informed that another partner - Eneco - has joined the PosHYdon pilot, the world’s first…

Rowe Technologies designs and manufactures high performance acoustic Doppler products and systems for navigation (DVLs) and oceanographic applications (ADCPs) for use in oceans, lakes, and rivers. We have a wide variety of products for use in real-time and self…
Sponsored