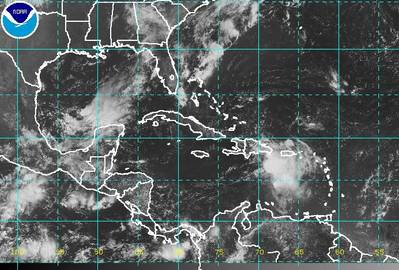 Tropical Storm Erika lashed Puerto Rico and the Virgin Islands with heavy rain and fierce winds on Friday, moving across the Caribbean and apparently heading for the Dominican Republic, northern Haiti and eventually South Florida, the U.S. National Hurricane Center said.
Due to some likely weakening over the Dominican Republic, Erika was no longer forecast to make U.S. landfall as a hurricane. It could still smack the Miami area with sustained winds of 60 miles per hour (97 kph) on Monday, however, before sweeping northward up the Florida peninsula, affecting Orlando's popular theme parks.
Florida Governor Rick Scott declared a state of emergency on Friday ahead of Erika, noting the storm could travel "up the spine of Florida" from Sunday into next week.
On Thursday, Scott said 8,000 National Guard were ready to mobilize, and communications had been tested in anticipation of a weekend landfall.
He urged residents, especially those who have moved to Florida in the decade since Hurricane Wilma, the last major storm to hit the state in 2005, to follow news reports.
The greatest risk over the next few days is heavy rainfall over northern Haiti and the Dominican Republic, with up to 12 inches (30 cm) in some areas. This could cause "life-threatening flash floods and mud slides," the Miami-based National Hurricane Center said.
Emergency officials were searching for several missing people after rain-triggered landslides on the small, mountainous island of Dominica on Thursday, Prime Minister Roosevelt Skerrit said in a radio broadcast.
Overflowing rivers and landslides washed away several roads and bridges there, and Tourism Minister Robert Tonge posted photographs and video on Facebook showing widespread flooding in the capital.
For days forecasters have described Erika, the fifth named storm of the Atlantic hurricane season, as unusually hard to predict due to disruption from wind patterns and its interaction over land, which weakens a storm, and warm water, which provides added energy.
As Erika neared the Dominican Republic's capital, Santo Domingo, on Friday morning, its sustained winds were measured at 50 mph (80 km per hour), the hurricane center said.
Forecasters now believe a more southerly path will take Erika over the mountainous Dominican Republic and northern Haiti, grazing Cuba's east coast as it regains intensity over warm seas in the Bahamas and the Straits of Florida.
Erika is likely to weaken "and could even dissipate in the next 12 to 24 hours," the hurricane center said.
(Reporting by David Adams and Victoria Cavaliere; Editing by Louise Ireland and Lisa Von Ahn)
• Facebook • Florida • Lisa Von Ahn
Email