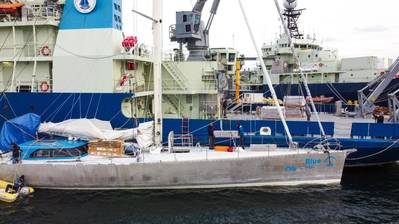 The 82- foot long S/V Iris tied up at the Woods Hole Oceanographic Institution (WHOI) dock, moored next to WHOI’s R/V Armstrong. The Iris departed Woods Hole on December 14, and will spend the next two months deploying approximately 78 Argo floats in the South Atlantic, before finishing its epic voyage back in Brest, France. (Courtesy of Blue Observer)

NOAA and partners have joined together to launch approximately 100 new Argo floats across the Atlantic ocean to collect data that supports ocean, weather and climate research and prediction. These will bolster the international Argo Program, which maintains a global array of about 3,800 floats that measure pressure, temperature and salinity of the upper 2,000 meters (1.2 miles) of the ocean.

The French sailing vessel Iris recently arrived in Woods Hole, Mass., after deploying the initial batch of 17 Argo floats across the Atlantic. While in Woods Hole, the S/V Iris crew will pick up the remaining floats for the second leg of the voyage in the South Atlantic, towards the island of St. Helena, off the coast of Namibia. The mission is one of the largest Argo float deployments in the Atlantic and is expected to last almost 100 days at sea, filling in crucial observing gaps.

This low-carbon research mission using an 82-foot sailing vessel was made possible through a new partnership between the private oceanographic company Blue Observer and international Argo Program partners from Woods Hole Oceanographic Institution, NOAA, Fisheries and Oceans Canada and Europe.

“Coming at a moment when we need meaningful action to tackle the climate crisis, this low carbon emission research mission sets a strong example for future ocean observing research,” said NOAA Administrator Rick Spinrad, Ph.D. “This voyage is a model of global public-private partnership that is helping us improve data that drive life-saving weather and climate forecasts.”

During what is one of the largest missions by a sailboat to deploy profiling floats, the S/V Iris crew will deliver Argo floats to predefined GPS positions, replacing those at the end of their life, and deploying floats in some new, under-measured regions to strengthen the Argo array. The mission lifetime of each float is about five years. During a typical mission, each float reports a profile of the upper ocean every 10 days, transmitting data to shore by satellite.

“Argo has revolutionized our ability to detect and monitor how the global ocean is changing as climate changes,” said Peter de Menocal, Ph.D., president and director of the Woods Hole Oceanographic Institution. “The whole ocean warming trends observed by Argo floats is proof positive that climate change is due to greenhouse gas emissions.”

Pandemic sparks innovative mission
The initiative was born during the international COVID-19 pandemic, when deployment of Argo floats and other oceanographic instruments by research and commercial vessels was sharply curtailed by COVID-19 restrictions.

“About 1,000 Argo profiling floats must be deployed every year to sustain the Global Ocean Observing System,” explained Mathieu Belbéoch, a manager of the Global Ocean Observing System and partner. “Often, they are deployed opportunistically by research ships, but these are very costly, and their trajectories are tied to specific missions and are not able to fill all the gaps or work in all seasons. Collaborations with citizens allow us to reach remote and not yet well sampled areas of the ocean, filling critical observational gaps.”

The low-impact journey comes on the heels of the 2021 UN Climate Change Conference in Glasgow, Scotland, with its urgent message of curbing the planet’s warming emissions. This innovative collaboration between intergovernmental, public, and private sectors also takes place within the United Nations Decade of Ocean Science for Sustainable Development, and is funded by NOAA, WHOI, Fisheries and Oceans Canada and Euro-Argo. 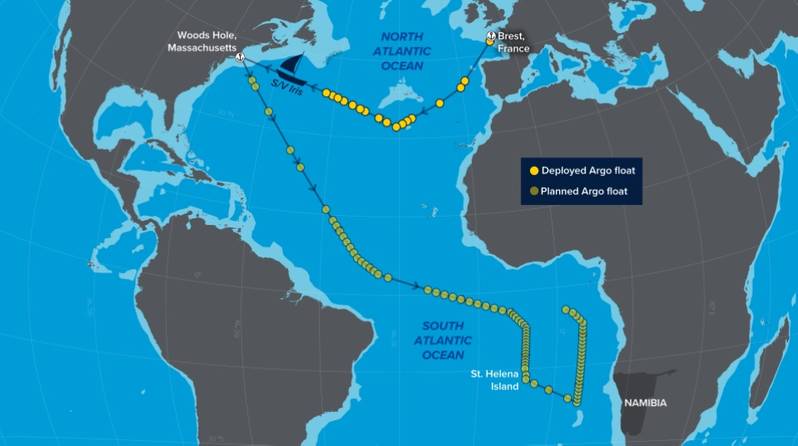 The French sailing vessel Iris arrived in Woods Hole, Massachusetts, after a three-week long journey across the Atlantic ocean where 17 Argo floats were deployed in support of ocean, weather and climate research and predictions. While in Woods Hole, the Blue Observer crew picked up the additional floats for the second leg of the voyage in the South Atlantic, towards the island of St. Helena, off the coast of Namibia. During what is one of the largest missions by a sailboat to deploy profiling floats, the crew will release Argo profiling floats to predefined GPS positions, to replace those at the end of their life and to deploy floats in under-measured ocean regions. This low-carbon footprint research mission was made possible through a new partnership between the private oceanographic company Blue Observer and international Argo Program partners from Woods Hole Oceanographic Institution, NOAA, Canada and Europe. (Courtesy of Natalie Renier/Woods Hole Oceanographic Institution)

Argo has transformed ocean science
In more than two decades, the broad-scale global array of floats has grown to be a major component of the ocean observing system and has changed the way scientists think about collecting data and collaborating internationally on data management for the scientific and operational forecasting community.

“Argo’s impact on ocean research has been profound: at least one paper a day is published using Argo data. The voyage of Iris will help us track vast regions of the Atlantic over the next few years by replenishing the array in very hard to access regions,” said Susan Wijffels, senior scientist of physical oceanography at WHOI and an Argo Steering Team co-chair.

“The Argo program is a true demonstration of the value of international collaboration. Since 2001, Canada has launched over 600 Argo floats throughout the Atlantic and Pacific oceans. This OCEANOPS Blue Observer mission is another example of partners working together to provide ocean data to the world,” said Timothy Sargent, Deputy Minister, Fisheries and Oceans Canada.