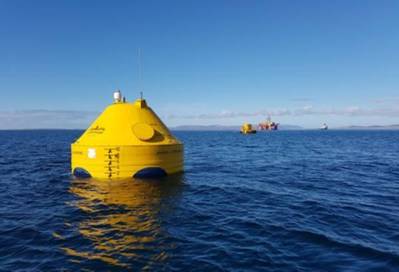 The 45-tonne moving mass system, installed at CorPower’s Stockholm base, is capable of simulating ocean wave conditions anywhere in the world. The design, build and accreditation has been supported by key supplier ABB and accrediting body DNV, CorPower said.

"Measuring 40m in length and 9m in width, the system will play a fundamental role supporting CorPower’s flagship HiWave-5 demonstration project, involving the deployment of the firm’s first full-scale WEC (Wave Energy Converter) off the coast of Portugal, later this year," the company said.

Over the past decade, CorPower has been undergoing five-stage product development and verification process, which initially started with small-scale tests in Portugal and France.  It later progressed to a half-scale WEC prototype, which also underwent dry-rig testing prior to sea trials in the Orkney Islands, Scotland, in partnership with utility firm Iberdrola.

“We are thrilled to announce the completion of the world’s largest wave energy test-rig,” said CorPower Project lead Antoine Boudoin, responsible for delivering the system. “It’s one-of-a-kind and purpose-built to test the overall performance and survivability of CorPower’s WECs at full-scale.

"The test-rig catapults us to the next phase, enabling us to perform a broad range of isolated tests, involving individual modules and equipment, before eventually testing the device as a complete integrated system in the ocean. Dry-rig testing is a highly effective process helping debug, improve, stabilize, fine-tune and optimize WEC systems before offshore operations, which are costly and weather dependent by comparison. As we now progress to full-scale we will continue with our rigorous approach to prove the robustness and durability of CorPower’s technology.”

CorPower’s commercial-scale WEC – 9m in diameter with a 300KW power rating – will spend around 4-months on the test-rig, which can deliver 7.2MW peaks and generate 80.6kNm torque, with 5 m/s maximum speed.