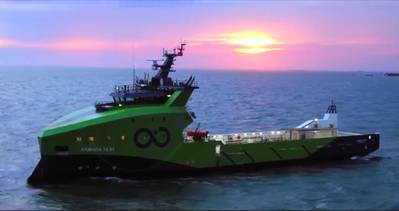 Ocean Infinity, a seabed survey and ocean research company based in the United States, said Tuesday that two of its new vessels, part of the Armada USV fleet, had set sail from Vietnam.

"We're officially the proud owner of not just one but two brand new ships. Armada 7801 and 7802 have set sail from Vietnam and are headed to Norway. The delivery of these first two ships marks an important milestone on our journey towards tech-enabled lean-crewed operations for a safer and greener maritime future," Ocean Infinity said.

More than two years ago, in February 2020, Ocean Infinity first announced its plans to build the world's largest fleet of unmanned surface vehicles (USV). Then in November 2020, it decided to expand the fleet with 78-meter-long robotic vessels that can be optionally crewed, placing an order for six of those units with VARD.

The two vessels that set sail from Vietnam are of the 78-meter type.

The company's Armada fleet will consist of USVs (some of them optionally crewed) of various lengths: 21 meters, 36 meters, 78 meters, and 85 meters.

At first, the 78-meter units will only need a skeleton crew, and eventually, they will be able to work offshore with no crew at all.

The vessels are made to work in the offshore energy, logistics, and maritime transport industries. They will be able to run on ammonia, which will cut down on emissions.

Shipbuilder VARD said in 2020 that the 78-meter vessels would have high DP2 performance, vast deck space, and twin moonpools, making them ideally suited for various extended payload operations requiring precision, such as ROV and AUV deployments and logistics.