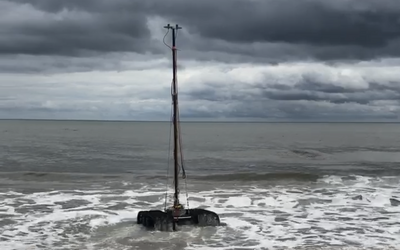 An amphibious crawling vehicle is designed to prevent people from having to work in the dangers of the surf zone and allow operations to continue in hours of darkness and in more inclement weather conditions.

The Sea Ox and the smaller Sea Otter, both developed by C-2 Innovations, have a maximum depth of 100m and can operate autonomously or under remote control. The rugged Sea Ox, which recently survived 6ft surf and 2kn tidal stream in Californian user trials, has a wet range of 10NM, a dry range of 24NM and can conduct station keeping to collect longer term static environmental observations, or observations at discrete points.

The crawler has a low center of gravity and its large working deck has access to vehicle power and data, allowing a large variety of sensors to be integrated or carried as independent sensors. Past payloads have included cameras, forward looking sonar, CTD, sidescan, penetrometers, vibracores, and turbidity sensors, as well as EM technologies towed behind on a non-metallic sled.

This summer, C-2 Innovations hosed a Sea Ox demonstration in Jacksonville, Fla. attended by MTR and representatives from USACE Jacksonville and various survey, environmental and dredging companies. Attendees were given an opportunity to pilot the vehicle in and out of the water using the handheld controller. Three beach profiles were run using GPS autonomy, and later a state profile line was run. The Sea Ox, which can pressure sensor based bathymetric data, was also equipped with a Nortek ADCP and AML turbidity and sound speed sensors.

The vehicle can be used in autonomous mode using inertial systems or GPS, and can be driven using RF antenna, RF buoy or using a tether. Trialed this summer at ANTX, the inertial system achieved a misclosure of 3.38m after a 2,813m mission with 44 turns.

C-2 Innovations said Scripps Institution of Oceanography has had one of its vehicles in use for four years, and USACE North Carolina FRF has a contract to purchase one. 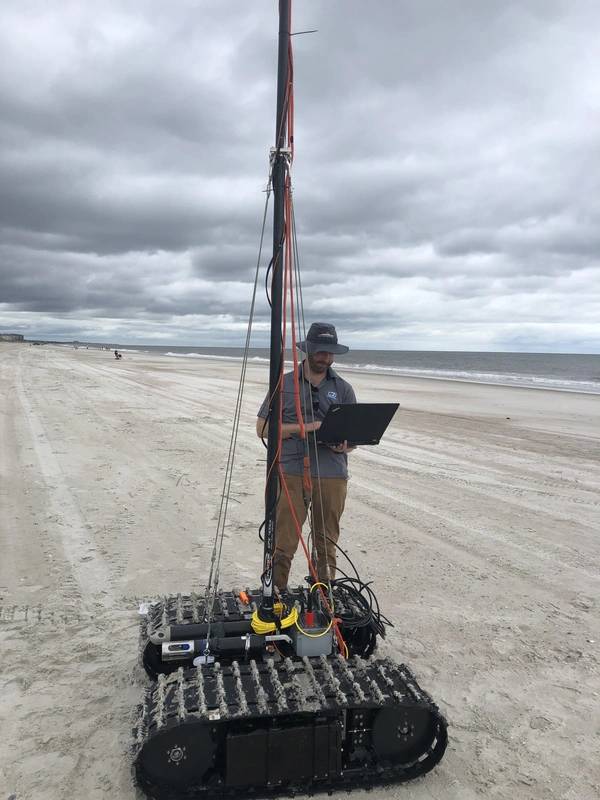