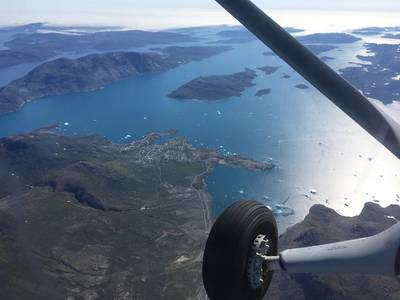 ASL Environmental Sciences (ASL) in Victoria, British Columbia, Canada has, following a tender process, entered into a contract with the Ministry of Mineral Resources, Government of Greenland.

Under this contract ASL will process and analyze a large amount of airborne hyperspectral data in order to produce mineral maps for the Gardar Province in south Greenland.

Hyperspectral remote sensing (also referred to as imaging spectroscopy) provides image data recorded in a large number of wavelengths, many outside of the human visual range.  The image data can be used in the same fashion as a laboratory spectrometer, to detect and quantitatively map spectral features specific to many minerals. By comparing on-ground hyperspectral measurements with the airborne measurements, it is possible to find areas where a given mineral has not been previously registered.

The Gardar Province comprises a suite of Proterozoic alkaline igneous rocks associated with continental rifting in South Greenland.  In this area there are great opportunities to make new discoveries of a variety of mineral resources, including rare earth elements. Part of the Province includes the Ilimaussaq Intrusion, which contains rare earths and where Greenland Minerals Ltd and Tanbreez Ltd have exploration permits. The region also includes many other areas that have been underexplored and have significant mineral potential.

The hyperspectral study and mineral mapping of the Gardar Province is a collaboration between the U.S. Department of State and the Greenland Ministry of Mineral Resources.  The first phase of the project consisted of collecting airborne and land-based data.  Field operations were conducted from late July to early August 2019 by project partners including the Greenland Ministry of Mineral Resources, the U.S. Department of State, the U.S. Naval Research Laboratory, the U.S. Geological Survey, and Asiaq - Greenland Survey.  The next phase of the project will include processing and analysis of the hyperspectral data. ASL's team of researchers, analysts and geologists will generate a range of information products and maps in collaboration with the Greenland Ministry of Mineral Resources.  This data will be made available publicly and free of charge by the end of 2020. This will provide the industry with new, high-quality data and improve the ability to promote foreign investment and local employment. Foreign investment in the mineral resources sector is one of the Government of Greenland’s main goals in order to diversify the Greenlandic economy.

The ASL remote sensing group (formerly G.A. Borstad Associates) has more than 40 years of experience in hyperspectral data collection as well as processing and analysis of both airborne and space-based data. The data can, for example, be used for monitoring the aquatic and terrestrial environment, mapping minerals and other research.