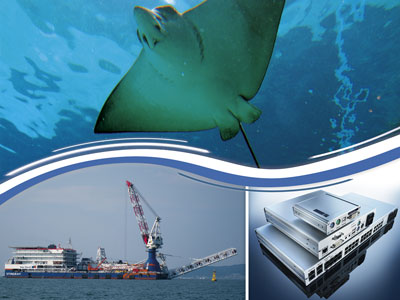 Hundreds of meters of pipeline a day
A broad range of all sorts of equipment from cranes to welding stations, even a gym and accommodation for up to 300 people is what the Stingray crew calls home. The barge itself and her standard equipment was built in China, but was later tailored and converted by Van Oord who adjusted it to their individual needs of a shallow water pipe lay vessel. The Stingray is designed in accordance with the high quality and safety standards in the oil and gas industry and equipped with state-of-the-art machinery to install pipelines from 6-60 inches in diameter. The interior of the vessel looks like a mass production site of motor vehicles. It’s a huge factory on sea.

Staying on track with KVM
Pipe after pipe goes into the belly of the ship where they are prepared for their future under the sea. Workers weld the tubes in place together in only a few minutes. The pipe curves downward from the stern over the stinger through the water until it reaches the "touchdown point," or its final destination on the seafloor.

On board, multiple computers control and monitor the processes of the precision work. They are installed in a safe technical equipment room. Via Guntermann & Drunck’s KVM matrix DVICenter, the computers are bound together and operation is extended up to the nautical bridge. The dual graphic card consoles of the KVM matrix on board are operated by the surveyor and the chief officer.

KVM keeps head clear for precision work
Among lots of other tasks, the surveyor provides general information about the pipe laying process while the chief officer is mostly concerned about the anchor pattern and anchor handling to hold the vessel in place. Laying pipelines requires precision as well as high standard technical equipment. Over distances of 100 kilometers, a deviation of only a few centimeters can cause a gap of almost 100 meters. Therefore, the demands on the positioning accuracy are high. To prevent the pipelines from cracking during installation and to make sure that neither undulations nor currents disturb laying the pipes, positioning system ensures the right lane. Controllers who work in close conjunction with the surveyor and the chief officer control Stingray’s ten anchor winches and keep her in place.

Thanks to KVM, the Stingray surveyors and chief officer are able to concentrate on their demanding tasks without even having to think about the computer hardware in the background, because the KVM equipment convinces with its intuitive operation.

Specialists at sea
The prime focus of Stingray is laying pipelines combined with shore approaches and other associated activities in shallow water from five meters up to more than 100 meters. Also the vessel is suitable for light offshore installations. Stingray complements Van Oord’s wide range of offshore services consisting of the construction of landfalls, installation of rock, trench dredging and backfilling and the installation of Single Point Mooring (SPM) systems and Gravity Based Structures (GBS).