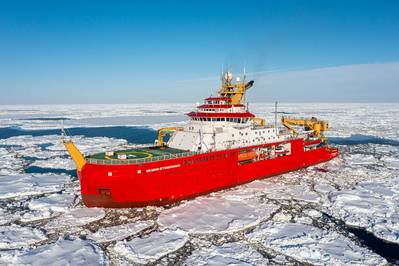 The U.K. has awarded Babcock International’s Rosyth shipyard a £45 million (approx. US$56.6 million) contract to maintain its fleet of three scientific research vessels.

Babcock Rosyth holds a number of major build and maintenance contracts, including the Type 31 frigate newbuild program as well as maintenance, repairs and upgrades for the U.K. Royal Navy’s aircraft carriers.

David Lockwood, Babcock CEO said, "We are delighted to have been awarded the contract to maintain this important NERC fleet.

"Our flexible and efficient solution will ensure the fleet is maintained to exceptional standards and optimize vessel availability in support of NERC’s global footprint."

The RRS Sir David Attenborough is operated by the British Antarctic Survey (BAS) and is one of the world’s most advanced polar research vessels, having departed the U.K. for its maiden voyage in November 2021.

The 2013-built RRS Discovery and 2006-built RRS James Cook are operated by the National Oceanography Centre (NOC). They conduct oceanic exploration around the world, undertaking multi-disciplinary marine science to unlock the mysteries of the deep ocean.

All three vessels use state-of-the-art technologies such as autonomous underwater vehicles, including the famous NOC Autosub called Boaty McBoatface.

Professor Sir Duncan Wingham, Executive Chair of NERC, part of UK Research and Innovation, said, "The U.K.’s fleet of advanced research ships provides state-of-the-art facilities for scientists to conduct research of our oceans and polar regions, building our understanding of the ice, atmosphere and seas.

"We look forward to working with Babcock Rosyth to maintain these ships and onboard facilities, which are a key part of the U.K.’s scientific infrastructure."