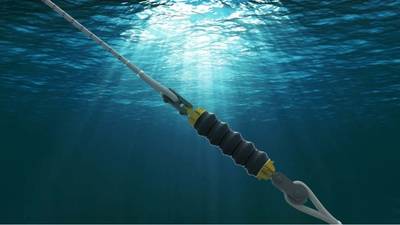 Bridon-Bekaert Ropes Group has said it has concluded an investment and commercial partnership with TFI Marine, Dublin, Ireland, to accelerate the go-to-market of digital-enabled mooring solutions for floating offshore wind farms.

"As part of this strategy, Bekaert today announces an equity investment in TFI Marine (Technology from Ideas), a leading mooring innovator, which has responded to the market needs with essential, patent-protected load reduction devices for floating offshore wind and offshore fish farm mooring systems," the company said.

According to the press statement released Monday, TFI Marine has developed and successfully demonstrated SeaSpring," a game-changing" polymer-based mooring component that "significantly reduces the mooring loads and fatigue experienced by floating platforms as a result of
wind thrust and wave motion."

The company said that the SeaSpring load reduction device brings down the footprint, costs, wear, and maintenance of mooring systems.

Moreover, the company said the SeaSpring is a self-powering device, enabling permanent digital monitoring of mooring systems.
The investment announced today will be used to construct TFI Marine's first manufacturing plant in Ireland to scale up the SeaSpring business to industrialization.

The partnership also launched a commercial collaboration between Bridon-Bekaert Ropes Group (BBRG) and TFI Marine, whereby a smart solution of BBRG synthetic ropes equipped with TFI load reduction devices will be introduced to the market.

"BBRG's 'MoorLine' synthetic ropes have been specifically designed for floating offshore wind applications where customers demand reliable ropes that ensure floaters stay put in the most challenging conditions. The combined expertise of BBRG and TFI Marine will expand the value creation potential of the mooring solution as it will increase the overall lifespan of the mooring system and significantly reduce the maintenance costs and mooring footprints," the company said.

Christof Dewijngaert, General Manager Synthetic Ropes of Bridon-Bekaert Ropes Group commented: 'We are proud to work together with TFI Marine, who have innovated a game-changing solution that reduces peak loads and strongly compliments the synthetic ropes from BBRG for permanent mooring systems. We see enormous potential in offering our shared customers a combined solution in what is to become an exciting new industry. Together, we will continue to develop the most advanced solutions in the floating offshore wind mooring market.'

Noel Halloran, Executive Chairman of TFI Marine commented: 'This partnership with BBRG will change the way people think of mooring solutions forever. The smarter mooring solutions for the future will combine TFI Marine's SeaSprings and BBRG synthetic rope along with several more initiatives currently being worked on. With the BBRG team, we have a partner who is totally committed to market change. We look forward to working with them. Their support is timely and essential to accelerate the delivery of our solutions globally.'

Bekaert said that based on announced and committed investments globally, the current pipeline of floating offshore wind (FOW) projects represents a capacity build-up of 121GW, of which 15GW will materialize during this decade.

"This would represent an addressable mooring market investment of at least € 1.4 billion before 2030 and exponential growth from then onwards. Bekaert's business segment Bridon-Bekaert Ropes Group (BBRG) has established a strong position in the deep-water mooring market with synthetic rope solutions. These BBRG solutions are a critical component in first demonstrator FOW projects in Japan, France, US, UK, China, Spain, and Norway," the company said.