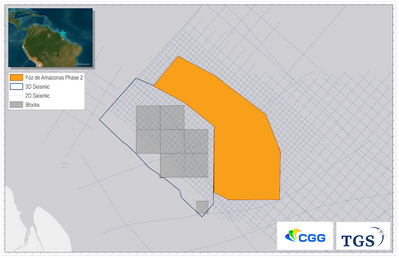 Foz de Amazonas Phase II extends coverage from existing 3D data into deeper water over prospective acreage identified by basin modeling, which is on-trend with other discoveries in the region. Credit: TGS

This survey, covering 11,425 square kilometers, will broaden the region's 3D coverage and deliver additional high-quality data essential for the exploration efforts in the basin, the companies said.

According to a statement by TGS, existing 2D data and adjacent 3D data indicate the presence of reservoir depositional fairways in this location which overlies a source interval contemporaneous with the Guyana Basin petroleum system. Basin model studies predict a mature Early Cretaceous petroleum system with extensive regional reservoir distribution.

The nearby Zaedyus discovery in French Guiana and the Narina and Venus wildcat discoveries on the conjugate margins of Liberia and Sierra Leone support resource potential in the Foz do Amazonas Basin, the companies said.

Early-out PSDM products will be available in Q4 2023, with final products available from Q3 2024.

The project is supported by industry funding.

Norwegian energy giant Equinor has exercised an option to extend the framework agreement with the seismic company PGS, originally…