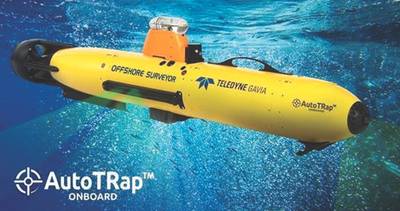 AI has emerged as a solution for delivering consistent and accurate results for underwater vehicles, led by developments such as AutoTRap Onboard, designed to be a smart, real-time automated target recognition (ATR) app offered from Charles River Analytics.

"AutoTRap Onboard automatically detects and identifies target objects in real time,” said Dr. Arjuna Balasuriya, Senior Scientist at Charles River Analytics. “This product saves time and money— operators don’t have to bring the vehicle to the surface, download its data, and then send it back down for further investigation (if necessary). With Teledyne Gavia, we offer our customers a better experience, giving them confidence that the area is clear and it’s safe to operate.”

Bob Melvin, Vice President of Engineering at Teledyne Marine Systems, added, “Our customers have been asking us for a reliable way to carry out seafloor surveys, such as mine hunting. AutoTRap Onboard makes finding these targets of interest much easier and builds higher levels of confidence in AI systems.”

AutoTRap Onboard has demonstrated excellent detection rates and false positive rates; identifying truncated conical objects on a rocky volcanic seafloor with a 90% probability of detection. AutoTRap Onboard includes: