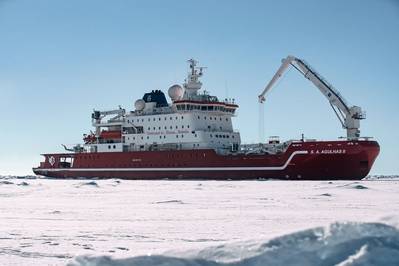 It was 1914 when the English explorer Sir Ernest Shackleton set sail on his Imperial Trans-Antarctic Expedition aboard a ship called Endurance. It was an ill-fated journey: the ship got trapped in the ice and eventually crushed by pack ice in 1915. It sank to the bottom of Antarctica’s Weddell Sea. (Shackleton and his entire crew survived the ordeal by escaping in smaller boats.)

It was difficult to believe that the Endurance might ever be found. The icy Weddell Sea is inhospitable and the wreck lay in more than 3000 metres of water. But thanks to a South African vessel, the SA Agulhas II, Endurance was found in March 2022. It was the second time the polar icebreaker reached the coordinates that Endurance’s Captain Frank Worsley recorded as the ship went down. The first was in 2019; the ship was not located on that occasion.

The tale of the Endurance is fascinating. But so is the story of the SA Agulhas II. Because of this ship, South Africa is becoming a leader in aspects of Antarctic science. For example, it is highly unusual to make in situ measurements of the physics, chemistry, and biology of the open Southern Ocean and its sea ice in winter because of the darkness, inhospitable weather conditions and high concentrations of sea ice.

Yet, since 2012, the SA Agulhas II has undertaken at least five wintertime voyages between Cape Town and the Antarctic sea ice, a journey of nearly 3,000 kilometres. These expeditions have yielded data that are essential to understanding the changing Southern Ocean, and to validate numerical models developed to predict future climate. My research group, comprising mainly postgraduate students, has collected samples on numerous cruises aboard the SA Agulhas II that, following their measurement in the Marine Biogeochemistry Lab at the University of Cape Town, are improving our understanding of Southern Ocean nutrient and carbon cycling.

The SA Agulhas II has also served – and continues to serve – as a training ground for hundreds of students, most of them South African, in a range of disciplines: oceanography, marine biology, atmospheric science and more. It annually supports SEAmester, a ship-based educational programme dubbed “South Africa’s first class afloat”. During this government-funded capacity-building expedition, approximately 50 postgraduate students from across the country spend 10 days aboard the ship. They are introduced to interdisciplinary, applied, and hands-on marine science.

Shackleton’s so-called “Heroic Age of Antarctic Exploration” was fundamentally a show of European colonial might. It kicked off decades of Antarctic research that was open near-exclusively to white men.

So it is fitting that one of the world’s most impressive icebreaking research vessels is today owned and operated by the only African signatory of the 1961 Antarctic Treaty – which protects Antarctica and its surrounding ecosystems from exploitation and annexation – and is a platform to train African researchers undertaking globally-relevant research.

Fully equipped
The SA Agulhas II is a Polar Class 5 vessel owned by the South African Department of Forestry, Fisheries and Environment and operated by African Marine Solutions.

She was built in the shipyard of STX Finland in Rauma, Finland, and handed over to the South African government in 2012. Cape Town is her home port.

At 134 metres long, with ten decks, a crew of 45 and berth space for 100 scientists, the SA Agulhas II was uniquely designed as both a polar supply ship and scientific research vessel. As part of the ship’s mandate, she annually supplies fuel, food, personnel, and other essential resources to South Africa’s research bases in Antarctica and on the Subantarctic Marion and Gough Islands.

She is also equipped with eight permanent scientific laboratories (with space on the stern for six additional specialised labs in shipping containers). The ship’s infrastructure allows for various instruments and sample collection equipment (and even people) to be deployed over the side or through the centre of the vessel via an opening in the hull known as a “moon pool”.

These and other features are critical when exploring a location as remote, vast and inhospitable as the Southern Ocean, which is typically defined as the waters south of 40ºS that connect the Atlantic, Indian, and Pacific Oceans. The westerly winds can exceed 60 km/hr, driving swells of over 10 metres. Sea ice more than a metre thick often extends over 1,000 km north of Antarctica. These factors make the region arguably the most logistically challenging and expensive ocean in which to conduct research.

Such research is critical. The Southern Ocean is the most important of all oceanic regions for Earth’s climate. Waters originating near Antarctica transport large quantities of heat and dissolved gases, such as the powerful greenhouse gas, carbon dioxide (CO2), around the planet and into the deep ocean to be stored for hundreds of years.

Nutrients like nitrogen and phosphorus, critical to all life on Earth, flow from the Southern Ocean to the tropical and temperate latitudes. There they are believed to support at least two-thirds of global ocean productivity. Without the Southern Ocean, our planet would not be habitable: continued research and monitoring of this marine system is critical.

The SA Agulhas II was able to reach the Endurance wreck site partly because of lighter than normal summertime ice conditions in the Weddell Sea. This is almost certainly a consequence of human-driven warming of the natural world. Significant reductions in Antarctic ice cover due to atmospheric and oceanic warming, along with related changes to the Southern Ocean and its ecosystems, present a very real threat to Earth’s habitability.

Broader value
Across the world, and in South Africa, government funding for research is declining; proportionally more science is being supported by private funders. A significant risk of this model is that a handful of powerful people, rather than a community of scientists reliant on peer-review and subject to checks and balances, get to set the global research agenda.

The SA Agulhas II stands out because she belongs to the people of South Africa. The ship’s success, under the leadership of master mariner Captain Knowledge Bengu, in locating the the Endurance is a reminder of her value not only to South African research, but to current and future global science initiatives.