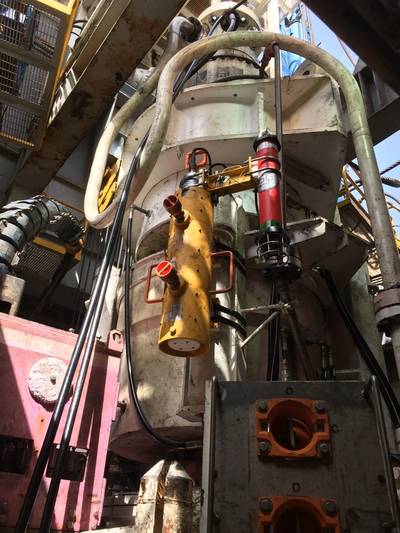 Fugro has provided a spectrum of services to BP Trinidad and Tobago LLC (bpTT) to allow safe drilling and completion of five subsea wells in an area of strong currents. The services include wellhead motion (fatigue) monitoring, metocean measurements and positioning services.

The positioning activities were carried out onboard the drilling vessel as well as on the three supporting anchor handling tugs (one tug had subsea acoustic ROV positioning). Fugro provided bpTT with dimensional control survey services, DGNSS verification, gyrocompass calibration and offset measurements, navigation at the well locations, and final positioning of the drilling vessel within the required tolerance of 3 metres. This position accuracy was required because the five wells were being drilled in a cluster (with separation ranging between 16 and 30 meters) and because of the need to accommodate subsea Xmas trees. Survey support was provided for anchor handling and ROV operations as well as for subsea asset positioning.

To enable the monitoring of subsea equipment integrity during operations, Fugro supplied its Wellhead and Riser Instrumentation Service (WARIS) which included monitoring at two subsea locations: on the BOP stack and on the riser, immediately above the lower flex joint. Data were relayed to the vessel by hydroacoustic modems and then transferred to secure onshore storage, before being processed and made available to staff both offshore and onshore. The motion measurements gave bpTT real-time tracking of wellhead fatigue as well as determination of foundation stiffness and the BOP stack resonant frequency. Midway through the program the recorded real-time data were utilised to update theoretical fatigue transforms and improve the fatigue life of wellhead components.

Strong currents at the well location needed to be understood for operational planning, as well as further analysis of subsea equipment motions. Fugro installed an Acoustic Doppler Current Profiler on the seabed for metocean measurements. Current measurements were relayed to the vessel in real time using the same hydroacoustic equipment as with the WARIS.

bpTT Drilling Engineer, Anil Saisbhan said, “The additional non-traditional services from Fugro with the WARIS and real-time ADCP measurements have enabled us to realize more fatigue life of wellhead components than was theoretically suggested, as well as to mitigate against operational risk with high currents which occur sporadically in the area.”

Fugro Trinidad Country Manager, Neil Bissoon, commented, “This project demonstrates another of the major advantages that Fugro can bring to operators. We delivered a cost-effective solution to bpTT’s drilling project by sharing synergistic support functions across three major services.”

DNV GL is now the world's largest ship and offshore classification society, the leading technical advisor to the global oil and gas industry, and a leading expert for the energy value chain including renewables and energy efficiency. DNV GL is the world-leading provider of software for a safer…