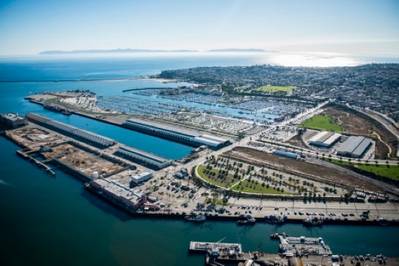 The Los Angeles City Council has unanimously approved a 50-year lease to transform a 100-year-old pier on the LA Waterfront in San Pedro into a world-class urban marine research and innovation center called 'AltaSea at the Port of Los Angeles'.

The lease agreement – signed between the Port of Los Angeles and Rockefeller Philanthropy Advisors , the latter who currently serves as the fiscal sponsor for the AltaSea project – involves approximately 35 acres of land and water at the Port’s City Dock No. 1 site, Berths 56-60 and Berths 70-71.

The anchor tenant of Phase 1 will be the Southern California Marine Institute , a strategic alliance of 12 major universities in Southern California that have marine science academic and research programs. The entire project cost is estimated at more than $500 million with completion over a 15- to 20-year timeframe.

The AltaSea site will be developed through a public-private partnership that includes the Port, AltaSea and a host of regional public and private universities. Funding commitments for Phase 1 of the project total $82 million to date, including $57 million in site-related capital investments by the Port and a $25 million gift by the Annenberg Foundation. Phase 1 is currently estimated to cost $185 million with a 2018 completion goal.

For the first phase of the project (Berth 56 and 57), the Port has agreed to make improvements to the wharf and subsurfaces to ready the property for development. AltaSea will be responsible for upgrading the existing historic warehouse structures, as well as other improvements and facility operations.