A new version of the Space Race is happening, with researchers aiming for the deep ocean.

Human history has shown us to be a resourceful species, always using the tools available to us to explore, understand and utilize the bounty of resources around us to create a better life. We have come a long way from the stone tools of our ancestors; the tools of today take the form of technology, computers, artificial intelligence and robots which we use very effectively in a number of areas including healthcare, education, transportation, manufacturing and communication. Many of these advances have been made possible by government leadership that spurs innovation, healthy competition and, ultimately, economic prosperity.

One such example is the government’s push to reach space in the 1960s – the Space Race. A healthy competition between the U.S. and the Soviet Union led to enormous innovation and, combined with the current private spaceflight industry that was triggered, in part, by the Ansari XPRIZE for suborbital spaceflight in 2004, has resulted in a global space economy currently valued in excess of $300 billion. The innovations, initially driven by the space race through NASA and other government entity participation and more recently through private industry, has not just been confined to space exploration and the technology created has been leveraged outside the actual missions. As a direct consequence of the interest and support from the governments of the 1960 space race era, we now have weather and communication satellites, as well as a number of spin-off technologies such as infrared ear thermometers used for babies, space blankets now used by everyone from emergency responders to campers, firefighting equipment and smartphone cameras.

Historically, there has not been a comparable government appetite for a high-profile race to explore the depths of our ocean – a race that would match the visibility and investment of 1960s space race. However, we are long overdue for a full exploration of this last great frontier on our planet; we have better maps of the surface of Mars than we do of our ocean floor. The ocean covers more than 70 percent of the surface of our planet but, on average, only 10-15 percent of the deep-sea floor has been mapped at a high-resolution. In places where we have high-resolution maps, we know that there is a strange and alien landscape underwater unlike any found above sea level.

One of the major hurdles often cited in mapping the deep-sea has been the expense of using ships. To overcome this and to further maritime innovation, the $7 million Shell Ocean Discovery XPRIZE was launched in December 2015. This is an international competition in which teams are challenged to develop underwater robots, sensors and camera technologies that will map the seafloor at a very high resolution and bring back images from the ocean so we all have an opportunity to see what is out there. As part of this, the National Oceanic and Atmospheric Administration (NOAA) is providing a $1 million bonus prize for the development of pioneering technology – and underwater “smart sniffer” that can detect an underwater biological or chemical signal and autonomously track it to its source.

The teams involved in this modern-day race have different approaches and are working to solve a number of challenges associated with operating in seawater and at great pressures. An inevitable outcome from this will be the spin-off technologies that develop into new economic opportunities, such as cheap 3D-printed casing for electronics that can withstand up to 5,600 lbs. per square inch of pressure.

Primarily through private industry, a race is currently underway and focused on four kilometers below the ocean’s surface. Today, teams are letting robots do the work of aquanauts with artificial intelligence and virtual reality (just as the space community relied on remote craft such as the Mars Exploration Rover and the Mars Global Surveyor). Private researchers, government groups and ad-hoc teams are racing to their goal, to better understand our oceans to ensure they are healthy, valued and understood. The tools we have at our fingertips now and in the near-future will finally allow us to find out what lies beneath the veil of the sea, and in doing this, we will inevitably enrich our lives with new discoveries and innovations.

The Author
Dr. Jyotika Virmani is Senior Director for Planet & Environment at XPRIZE and prize lead for the Shell Ocean Discovery XPRIZE. Dr. Virmani has over a decade of professional experience in oceanography and a Ph.D. in physical oceanography. 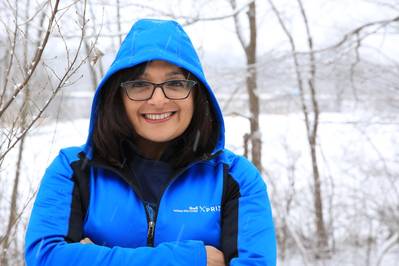