Virmani defines what it means to be passionate and motivated in the field of marine science and exploration. Her humble start began in her hometown of Manchester, England, inspired by the nearby Lovell Telescope — which was then the world’s largest steerable dish radio telescope. Today, her interests and studies, spanning atmosphere to ocean, have guided her drive to lead and foster scientific advancement in the marine and subsea industry, all while facing adversity including redefining the role of women in science. Growing up in a nation under the rule and guidance of Queen Elizabeth II and Margaret Thatcher and surrounded by a supportive family, Virmani never questioned the possibility of noteworthy and pioneering women. Believing it is important for children to grow up around role models, she remarked how lucky she was to grow up with female figureheads.

Virmani’s studies led her to the intersection of marine and atmospheric science. While completing her master’s degree in atmospheric science at SUNY Stony Brook, Virmani was given the chance to take a few marine science courses and she noted, “That’s when it really clicked, that the weather and climate is this interconnected system, which includes atmosphere and ocean.” Her subsequent PhD was in physical oceanography at the University of South Florida, where she lived and worked with the Florida Coastal Ocean Observing System Consortium during the notorious 2004-2005 Atlantic hurricane season. It was here her career became one of adversity. Environmental adversity, that is.

Shortly after Virmani moved back to England to take a job with the Met (Meteorological) Office, the Icelandic volcano Eyjafjallajökull erupted in April 2010. She had a direct role in the ensuing crisis since the Met Office functions as the regional prediction center for global ash production. Later that month, the Deepwater Horizon oil spill occurred in the Gulf of Mexico, near where Virmani had previously lived and worked. She was asked to return to Florida to help with the spill’s aftermath and did so later that year. Several years later in 2017, while working as the senior director for the XPRIZE Foundation Plant and Environment team, an entire test bed off the coast of Puerto Rico was destroyed by Hurricane Maria. Despite other setbacks, including having lost crucial data while pursuing her PhD, Virmani emphasized the importance of perseverance. “You can quit at any time—I could’ve quit my PhD—so I would say if you really want to do it, just keep working at it and work through it.”

While discussing the future of marine science and technology, Virmani admitted that it’s impossible to ignore the influence of COVID-19, both near and long term. Marine research and education have been largely impacted for the foreseeable future, with degree programs being delayed or moved online and research missions put on hold. How the world deals with the crisis, though, is a clue to changes in numerous fields of science.

“What this pandemic has done, and it’s not just in the field of marine science—it’s across the board—is brought forward a lot of those technology changes that we thought would take much longer to achieve.” For Virmani, the marine industry’s future is rooted in rapid technological advancement and COVID-19 is simply demonstrating its capabilities. “We’re on the cusp of a lot of streams coming together—not just in the ocean, but the infrastructure, too—so I think we’re going to see this fantastic, rapid increase as technology changes at an exponentially fast rate. We’re also looking at, increasingly more and more, the intersections of different kinds of science and different kinds of technology. For example, merging new material science and capabilities with the robots, or using artificial intelligence to analyze the data.” SOI already has begun adapting its technology to pandemic-related restrictions, continuing the year-long research mission aboard the R/V Falkor that began in Australian waters in early 2020.

Despite the lockdown, numerous deepwater expeditions have been completed with the help of a telepresence crew. New discoveries have already been made, proving to Virmani that despite COVID-19, there’s still much more to achieve in the coming years. “I think we’re in a new golden era of ocean exploration because this technology will allow us to scale out a lot more. The ocean is so massive—we’ve only really explored 5% of it, so we have such a vast area to cover and we’re going to need this technology to help us do that.”

The future for SOI looks promising, with numerous achievements expected in the coming months. A partnership with the Seabed 2030 Project (a collaboration between the Nippon Foundation of Japan and the General Bathymetric Chart of the Oceans) has been announced, featuring a signed memorandum of understanding, as well as confirming SOI’s participation in sharing seafloor mapping data. Even more recently, the National Oceanic and Atmospheric Administration announced its intention to strengthen a longstanding relationship with SOI, with the goal of further exploring, mapping, and protecting the ocean. SOI staff also look forward to technological advancements, including a process for ROVs to collect deep-water samples sustainably and safely.

With so much already overcome and accomplished, Virmani sees a limitless future. Her mission, laughingly quoting Star Trek, is “to boldly go.” She hopes to continue SOI’s work and further “push and expand the field of science and research, as well as technology development opportunities at sea.” With her experience and passion, perhaps she’ll also embrace the words of Captain Jean-Luc Picard, “Things are only impossible until they’re not.” 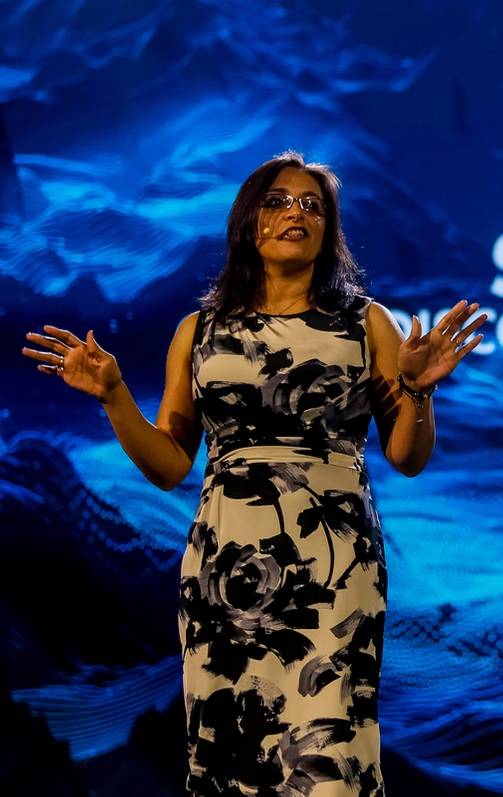 Dr. Virmani talks about what it takes to lead and operate an XPRIZE competition and announcing the final number of registered teams in the Shell Ocean Discovery XPRIZE, at Visioneering in October 2016 at Terranea in Rancho Palos Verdes, near Los Angeles. © XPRIZE