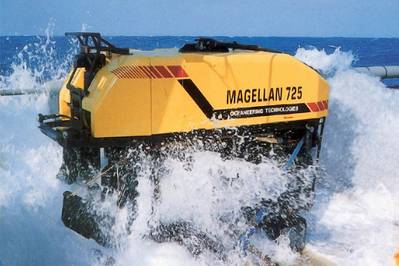 The donation includes the Magellan 725 ROV, the Ocean Discovery ROV, and the Ocean Explorer 6000 Towed Sonar System, together with the infrastructure needed to deploy the vehicles including winches, cranes, power systems, operational modules, workshops, and supplies.

"These vehicles contributed to several historic projects, including the successful recovery of the lost Apollo “Liberty Bell 7” space capsule from the floor of the Atlantic Ocean and live-streaming video from the Titanic," Global Oceans says.

The parties have also agreed to jointly operate and technically support the ROVs on future Global Oceans projects, on a project contract basis.

The ROV depressors will be fitted with battery arrays for auxiliary power at depth.

"When relaunched, these vehicles will contribute significant capacity for deep-sea biophysical sampling, seabed mapping, exploration, habitat surveys, and scientific research for several Global Oceans projects, and will be made widely available to the international ocean science community for research and for training the next generation of ocean scientists," the nonprofit explained.