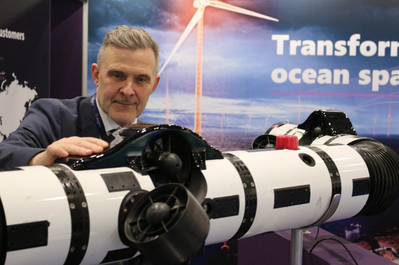 The final day at Oceanology International in London was quieter, but the conversations still continued, including those with a new cohort of companies looking to offer new ways of doing business, as MTR's Elaine Maslin found.

The final day of this year’s Oceanology International conference, being held at London’s Excel Centre, was a quieter affair than the past two days, but those who remained were treated to dockside demonstrations in warm sunshine and continued conversations about new ways of doing business on the show floor.

A host of new companies were present at this show, both as exhibitors and visitors. Many have plans to offer their services differently, a plan which often includes investing in uncrewed platforms.

Sulmara Subsea and Argeo are two such companies. Sulmara hosted a Saildrone Voyager on its stand, clearly signaling its intents. The company recently announced it was buying 10 of these vehicles, while also working with a DriX USV, collaborating partner in Beex in Asia, and working with Forssea Robotics on floating wind farm solutions, all geared towards subsea autonomy. The firm’s innovation lead, Al Rumson, also presented on advancing USV towed survey solutions, specifically targeted at remote subsea pipeline inspection, during the conference session.

Meanwhile, Trond F Crantz, CEO at Argeo, could be found talking about their plans, which includes using the Eelume snake robot for subsea IRM and conducting operations using a new Maritime Robotics USV based on an Ulstein X-bow style hull. They’ve also invested in Hugin and SeaRaptor 6000 AUVs from Kongsberg and Teledyne Gavia respectively.

Set up in 2020, Nicola Offshore is a joint venture between Nicola Engineering and Dutch workboat manufacturer ProBarine.

This is by doing more processing onboard but also using catamarans that transit much faster to and between survey sites and even to conduct operations 24/7 using back-to-back crew. But it’s also looking to increase actual survey speeds later this year. “We would like to disrupt the upcoming offshore renewable survey market in Europe using our vessels, generating data in a more disruptive way,” he says. “Clean data delivered faster.” 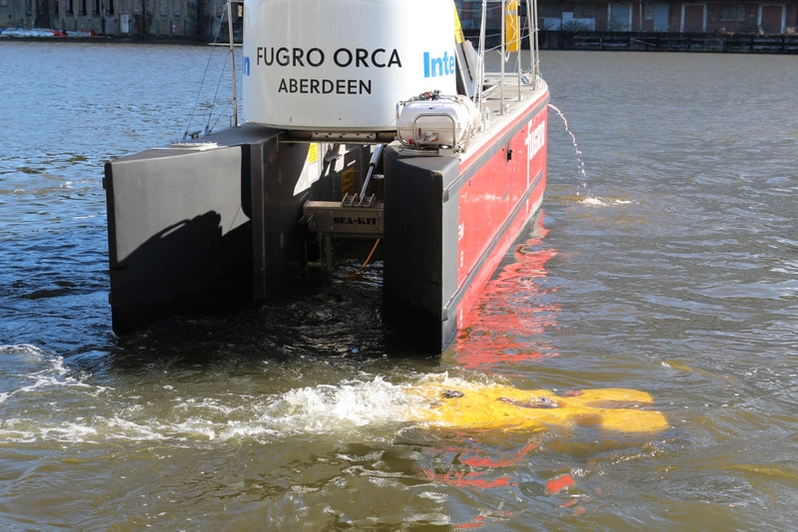 SES also wants to do things differently. It’s started out in rentals, moved into “servicification” of equipment but is now looking at survey as a turnkey service, says Sören Themann, the firm’s CEO, including through using USVs working with Florida headquartered MARTAC. The idea is to be fast and agile, he says, with vehicles that are as autonomous as possible. But the longer-term vision is commoditizing maritime data.

“The goal is to change the way maritime data is sold, because everything currently is sold on a project by project basis.” Using autonomous systems, data gathering can be done more cost-effectively and speculatively, so that’s it’s a ready product to sell when a customer needs it.

It's an idea others, including Argeo, whose founders have a background in geoscience, where this is a more common model, think is a way forward.

That includes US firm Bedrock Ocean, whose CEO and co-founder Anthony DiMare was visiting the show, demonstrating the firm’s new maritime survey cloud data platform, which is now populated with free to access public data.

However, changing ways of working isn’t just being driven by new entrants. Fugro was also out in force at Oceanology, inside and dockside, demonstrating its USV fleet’s capabilities. Dan Jones, director of IRM services for Europe and Africa at Fugro, said: “We look at the value being in the deliverable, rather than the method of acquisition.”