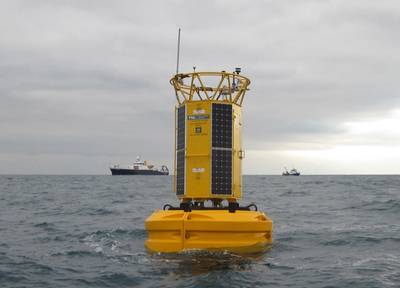 Acoustic release transponders from Sonardyne were chosen by the UK’s Met Office to secure its network of moored buoy Marine Automatic Weather Stations (MAWS) in the North Sea and Atlantic Ocean.

Sonardyne’s RT 6s and deck topside command units will be used to support deployment and retrieval of the MAWS buoys from their
locations as far north as the Faroe-Shetland Channel and down to the southwestern approaches and the English Channel in the south.

Because many of the buoys are moored in more harsh North Atlantic waters, they have to be designed to withstand extreme conditions, including
significant wave heights recorded at above 18 m. They also have to be serviced every two years, so the Met Office needs a safe and reliable
mechanism to allow for easy release from and then redeployment to their seabed moorings.

To support the MAWS deployments, each buoy will be fitted with two releases installed in a load amplification frame, providing a working load limit (WLL) of 15 tons. This configuration provides both equipment redundancy and the WLL needed to withstand harsh ocean conditions. Operators will command and control their RT 6s using Sonardyne’s newly developed Deck Topside. Rugged and portable, Deck Topside features a high brightness screen, inbuilt GPS receiver for recording deployment locations and a battery life of eight hours. A cabled, over-the-side dunker provides the secure acoustic communication link between the surface and RT 6s.