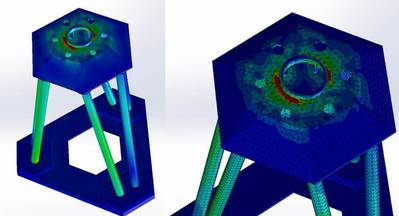 The solution, which is currently being subjected to extensive physical model testing, is intended to help keep costs down as offshore wind projects move into deep waters where traditional construction methods of hammering monopiles into the seabed are becoming more and more expensive, its developers say.

HR Wallingford notes that as of March 2019, the UK had almost 2,000 offshore wind turbines with over 7.8 GW of power generation capacity, which the National Grid “Future Energy Scenarios” predict could rise to almost 30 GW by 2030.

This is where the Gravity Tripod comes in.

Matt Bleasdale, Director of OWLC, describes the Gravity Tripod as “a unique structure combining the best aspects of other foundation concepts into one low-cost solution.”

“It requires no piling, is low drag, low scour and installed with minimal seabed intervention,” he added.

“The structure is able to accommodate turbines from 3 to 16 MWs,” Bleasdale said, “and, having been designed for low bearing pressures, is capable of accommodating a wider range of seabed types, with less seabed preparation, than other gravity base designs.”

Funded by the Department for Business, Energy and Industrial Strategy (BEIS), a wide-ranging team of renewables experts are taking the Gravity Tripod foundation though a series of stages, with certification from DNV, in preparation for demonstration of the design with an prototype structure. Design work and optimization will be undertaken by ODE, with testing of the physical components conducted by ORE Catapult. Cambridge University will conduct geotechnical sediment modelling, looking at the interaction between the structure and sea bed. HR Wallingford will conduct physical model testing to investigate the loads applied to the structure during installation, those caused by exposure to large waves once the foundation is in place, and to determine the amount of erosion (scour) that may develop around the base of the structure if left unprotected.

Dr. David Todd, Business Development Manager for Research at HR Wallingford, said, “We are looking forward to working with OWLC on this exciting new foundation concept. The foundation will be subjected to rigorous physical testing in the Fast Flow Facility, a unique wave-current-sediment flume designed for the offshore wind market, making it the ideal location for installation, survival and scour testing of offshore wind foundations.”

AGEOTEC ROV is the R.O.V. With more than two decades of experience in coastal and offshore surveying and construction, and a clear vision of the real needs of professionals who work routinely with ROVs and subsea systems, AGEOTEC ROV has conceived a wide range…