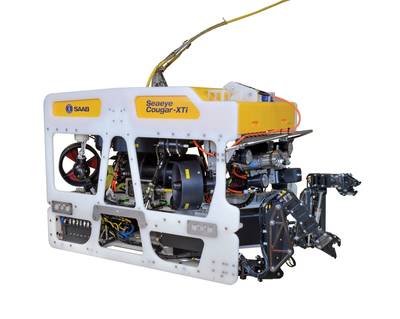 Kaiyo Maru is one of a fleet of vessels belonging to Kaiyo Engineering, the only privately owned research and observation company in Japan.
The Cougar XTi adds to Kaiyo’s portfolio of Saab Seaeye robots that include a Leopard and a Falcon.

In addition to its cable inspection role, the Cougar will also be used by Kaiyo Engineering to cover additional Leopard work.

Kaiyo’s Cougar comes with four Imenco cameras, a Tritech SeaKing sonar, Nortek DVL and station-keeping software, and a five-function heavy-duty manipulator with a camera. Its intelligent iCON behavior-based ecosystem endows each device with its own microprocessor for individual control and real-time feedback, in a modular future-flexible system that allows for further development and innovation.