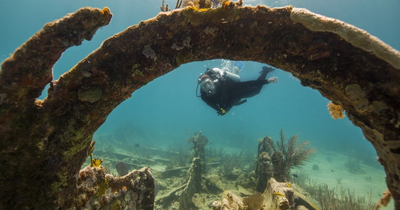 According to the company, the historic artifact area is still under investigation and could either be part of the historic material previously found over the past few years or a second historic shipwreck entirely.

"Currently there is not enough information to precisely determine the provenance of the artifacts," the company said.

"In accordance with the current site permit, the site has been reported to the Florida Bureau of Archaeological Research (FBAR) and we have temporarily paused bottom-disturbing activities within 50 meters of the location containing the artifacts in order to preserve the archaeological site context until a continued site exploration plan can be submitted to the FBAR," it said.

Once submitted, the site can be more extensively explored. In the meantime, Seafarer Exploration said it would will continue to archaeologically investigate this area as well as explore other locations of interest in Area 1 and Area 2.

The project archaeologist, Dr. Robert H Baer said: "The Seafarer Exploration discovery possibly dates from the mid - 1600s to the period ending before the Industrial Revolution - no later than 1800.  The type and orientation of the artifacts on the ocean floor is indicative of materials used to construct a colonial period sailing vessel that came to rest on the ocean floor where it decayed leaving a fairly compact scatter pattern.

The location and depth would have also minimized scatter from storms and near-shore surge. This is unlike other sites which can be scattered for miles."