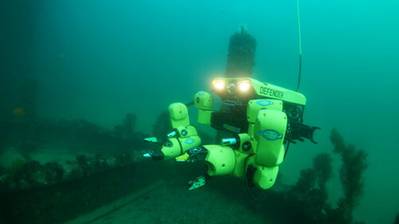 RE2 Robotics received a $9.5 million contract from the Office of Naval Research (ONR) to create an underwater robotic system for the autonomous neutralization of underwater mines for the U.S. Navy. The program, called Maritime Mine Neutralization System (M2NS), will use the RE2 Sapien Sea Class system to precisely place and attach neutralization devices to underwater mines and water-borne improvised explosive devices (WBIEDs).

RE2 will serve as the systems integrator for this program. In addition to RE2 Sapien Sea Class, the M2NS will use components, including RE2’s advanced computer vision and autonomy software, RE2 Detect and RE2 Intellect, to enable the precise, autonomous, and clandestine neutralization of a target.

The M2NS comprises technologies such as RE2’s Sapien Sea Class arms and VideoRay’s Defender remotely operated vehicle (ROV).  The RE2 Sapien Sea Class arms, which were originally designed and developed for the ONR, feature a compact, strong, electromechanical design with human-like dexterity (7-function per arm) that is neutrally buoyant.  The fusion of these key technologies provides superior strength and precision while manipulating neutralization devices.