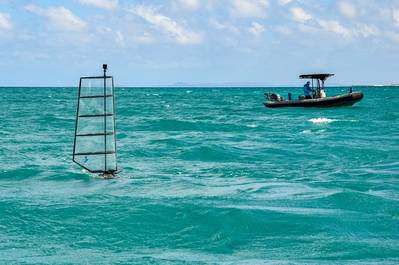 The Engineer Research and Development Center (ERDC) of the U.S. Army Corps of Engineers (USACE) along with logistical support from the US Navy successfully tested their SubSeaSail G6 platform at multiple coastal sites off the Vieques Island, Puerto Rico.

Remote sensing applications for monitoring underwater unexploded ordnance were demonstrated by mounting a passive filter assembly to the G6 platform to detect explosive compounds in the water. Additionally, a water quality sensor was mounted to monitor other water quality parameters including temperature, salinity, depth, and turbidity.

During the demonstration, the G6 platform was remotely sailed or guided through a programmed GPS waypoint trajectory. This allowed ERDC researchers to safely complete waypoint navigation missions in study areas. Dr. Guilherme Lotufo and Justin Wilkens from the Environmental Lab at ERDC stated, “The SubSeaSail G6 platform has proven to be a great tool for safely monitoring underwater munitions sites, waterways, and other aquatic environments of relevance to the USACE as it can integrate passive samplers as well as a variety of other water quality sensors and image sensors critical to helping the USACE complete its mission.”

The SubSeaSail G6 platform is a wind-propelled and solar powered unmanned semi-submersible sailing vessel (USSV) with key patents including a sailing vessel with the hull below the waterline, greatly reducing drag as well as the visual signature. A second patent is for the Passive Wingsail Control Mechanism, which sets the wingsail at the optimum angle without any lines, pulleys, or electronics, significantly reducing complexity and cost. A servo to control the rudder is the only electro-mechanical component needed to sail autonomously, resulting in a “hotel load” to run the entire platform of less than one Watt.

At the ANTX 2019 demonstrations, SubSeaSail demonstrated the ability to sink the entire system including the wingsail below the waterline to hide from extreme weather and bad actors, carry other unmanned systems to remote destinations, and perform long-duration missions. For ANTX 2020, SubSeaSail will be demonstrating the ability to remotely release unmanned systems, act as a mobile gateway buoy, and carry additional sensors such as cameras for protection of Exclusive Economic Zones (EEZs) and other applications, as well as our current work on a payload delivery variant for another agency.

“The entire SubSeaSail Team is very proud of the G6 platform accomplishments with our key client, the USACE ERDC, and are excited to collaborate in 2020 with additional partners on a variety of applications taking advantage of our disruptively economical platform that is engineered for simplicity,” said Sean Newsome, Director of Business Development.