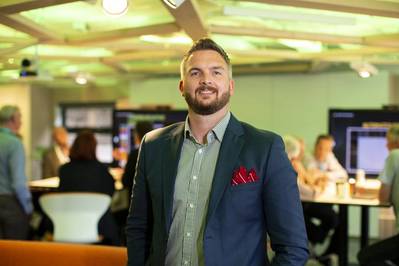 With just under a month left to apply for this year’s cohort of our technology accelerator program, TechX Pioneers, it’s a great time to celebrate the successes of the class of 2018, as well as look forward to the opportunities ahead.

In March last year we whittled down over 125 international applications to just 10 start-ups that met our exacting criteria for enrolling on the first TechX Pioneers program.

The 16-week intensive accelerator program, and follow-on 12-month incubator, provides unprecedented access to a host of expert mentors, global partners in the oil and gas industry, unrivaled access to market, and crucially, game-changing funding. Up to £100,000 is available to each start-up without any equity take or pay back. What’s more, the developers retain all intellectual property.

From artificial intelligence-based data analytics, to cutting-edge scientific materials technology, each of the 10 finalists have developed unique and exciting technology offerings. While the majority hailed from the North East of Scotland, two came from London and one from Italy.

Of these 10 companies, seven have secured 14 different field trial opportunities with major operators in the North Sea – a 70 percent success rate. An astonishing statistic, considering many of these companies didn’t exist 18 months ago.

Historically, it has taken up to 15 years for some new technology to be accepted by the U.K. oil and gas industry. Start-ups faced an uphill battle, with unprecedented failure rates in excess of 90 percent.

However, the downturn has upended that trend. The impact $30/bbl oil prices had on the U.K. industry and the North East of Scotland is still fresh in our minds. Nonetheless, with 20 billion boe still out there to recover in the U.K., we have a huge opportunity ahead of us.

With the support of the OGTC and the surrounding supportive ecosystem in the North East of Scotland, the industry is embracing numerous of these early technology opportunities.

Graduates of the OGTC’s first TechX Pioneers program are already making their mark on the industry, with some of the industry’s key players keen to trial their technological solutions to sector challenges.

One of the TechX Pioneers, Tenzor Geo, has secured offshore trials of its micro seismic technology with BP in the North Sea, starting early in 2019.

Test1, who have developed a unique foam which can soak up oil from spills – so the oil can be recovered, and the foam reused – are carrying out field trials at Aberdeen Harbor.

Blue Gentoo, a firm which has produced a hydrate management tool that could save billions of dollars in reducing the amount of chemicals used to prevent hydrates, has a letter of intent for demonstrations.

Sensalytx, a company developing software to make sense of the vast amounts of data produced by fiber optic downhole sensing systems, has a trial lined up with an independent operator in the North Sea.

In October last year, hot on the heels of these finalists graduating, we launched the global search for our next group of groundbreaking entrepreneurs.

The TechX team and I have since taken to the road, visiting London, Manchester, Edinburgh as well as our home city of Aberdeen. We also crossed the Atlantic, holding roadshows in Houston and Boston, in a bid to attract the most innovative tech start-ups from around the world.

Following applications closing on January 31, a select group will take part in a finalist bootcamp in February. The successful applicants who make it through the bootcamp will then be offered a place on the Pioneer program which will begin in May and run for 16 weeks.

The Pioneers from Cohort 1 are forging ahead with industry trials and market penetration. Cohort 2 is taking shape as we welcome applications from around the world. It’s fair to say that TechX isn’t just another accelerator scheme; it is THE accelerator for oil and gas.