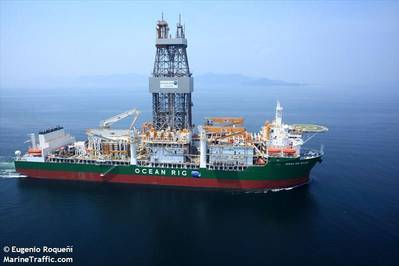 Offshore oil driller Transocean Ltd said on Tuesday it would buy peer Ocean Rig UDW Inc in a $2.7 billion cash-and-stock deal, its second major acquisition this year as the company bets on a recovery in the offshore sector.

The acquisition signals new optimism for offshore drillers, which were hit hard by the steep plunge in oil prices from 2014. Offshore projects, which are more costly than onshore work and take years to develop, became less attractive after oil prices fell to below $30 a barrel in 2016.

Global crude prices have since recovered to above $70, renewing producer interest in offshore basins around the world, including Brazil and the U.S. and Mexican Gulf of Mexico.

The deal would provide Switzerland-based Transocean with nine ultra-deepwater drillships and two semisubmersibles, the company said. Annual cost savings are projected to be about $70 million.

"We see strong contract opportunities emerging across the globe for the combined fleet (particularly in Brazil)," analysts at Tudor Pickering & Holt Co wrote in a note on Tuesday.

Majors, including Norway's Equinor, Chevron Corp and BP, won bids for offshore blocks in Brazil, which hold billions of barrels of oil.

"The announcement is not a surprise. Industry consolidation is necessary to get these premium assets back to work over the next two to three years," Leslie Cook, an analyst with Wood Mackenzie, said in a note.

She added that, "as rates begin to float back up, the need to keep drilling costs down will drive demand for these newer rigs."

Transocean will pay 1.6128 newly issued shares and $12.75 in cash for each share of Ocean Rig's common stock for an implied value of $32.28 per Ocean Rig share, which represents a premium of 19.2 percent to the stock's close on Friday.