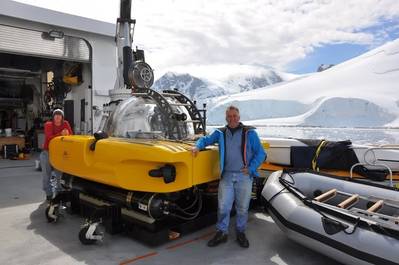 Triton’s booth at FLIBS will feature a Triton 1000/2 (the same 1000/2 that made the first-ever manned submersible dives in Antarctica last year) as well as a scale model of a Triton 3300/3. Triton will also be promoting its new iPad application, which allows users to view and customize each Triton model.

In addition, Triton will be distributing hard copies of Yacht Based Submersibles: Selection, Integrations, Operations & Maintenance. Released in digital format at the Monaco Yacht Show, this comprehensive booklet is part of Triton’s commitment to taking a leadership role in educating industry professionals, crew and owners about the realities of submersible ownership and operation.

Triton will also be featuring innovative submersible support vessel (SSV) designs developed in partnership with Bury Design. SSV designs include the unique Triton Launch and Recovery Catamaran (LARC), a highly efficient SSV capable of speeds up to 20 knots with a range of up to 1000 nautical miles. The 23-meter LARC is capable of launching and recovering any of Triton’s two or three passenger models in a wide range of sea states making it unique in the world. At under $3 million, the price may be the LARC’s most attractive feature as it eliminates the need to own a large expensive vessel in order to operate a Triton.