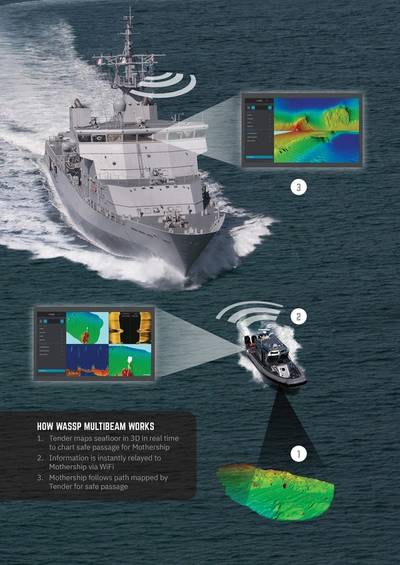 Revealed at Pacific Expo 2019 in Sydney this week, W3 RDS has been designed for Navy’s, Maritime Police and Search & Rescue organisations for use where depths are unknown and to find safe navigation routes for larger vessels.

When a fixed transducer installation in a small vessel such as a tender isn’t always practical, the W3 RDS has been designed around a portable Carbon fiber Mast that includes a transducer, motion sensor and satellite compass. This lets operators deploy the unit over the side or the transom of the vessel into the water quickly and easily often in just minutes.

Once deployed, W3 RDS can quickly and effectively profile the seafloor and water column in search of sunken vessels, aircraft or vehicles. Or it can be utilized in events like cyclones, hurricanes, volcanic eruptions, earthquakes or war disasters which can alter the seafloor in such a way as to make navigation unsafe for support vessels.

When in operation, W3 RDS uses a wireless link or a naval secure communication system to send real-time seafloor map data back to the mothership bridge system and display via a WASSP CDX display software or MaxSea navigation plotting platform - all in real-time.

W3 RDS is designed around the fully digital DRX transceiver and features a low power processor DRX-32 (equivalent to 1kW), with the high-frequency WMB-160 transducer to give operators a maximum depth of 400m.

Designed to be compact, the DRX Processor is housed in a Pelican case to protect it from water damage. The whole system weighs in at just 70kg (including carry cases), making it very portable and giving it the ability to be easily transported by just two people from vessel to vessel, or even helicoptered in if necessary.

“WASSP Multibeam was originally designed to help with the placement of Rock Lobster pots to optimize catch, and since then the technology has found many new markets and opportunities around the world such as hydrographic survey. With recent developments allowing a great mix of performance and portability we are very excited to bring our technology to this new market,” says WASSP Global Sales & Marketing Manager Rufus Whiteford.

WASSP Multibeam has already been used effectively in disaster relief. After the Christchurch earthquake in New Zealand in 2011, there was a need to profile Lyttelton Harbor – paving the way for safe passage of Navy vessels, which were bringing in much-needed supplies and aid. At the time, the underwater survey was undertaken by local commercial fishing boats where it was found that in some places, the seafloor had risen by a staggering seven meters.

WASSP was also used during the salvage of the container ship Rena which ran aground on the Astrolabe Reef on New Zealand’s East Coast in 2011. WASSP was instrumental in helping Rena salvagers quickly survey the surrounding coastline for sunken shipping containers.

Teledyne Marine is no stranger to the MTR reader, a group of leading-edge marine and subsea technology companies that are…