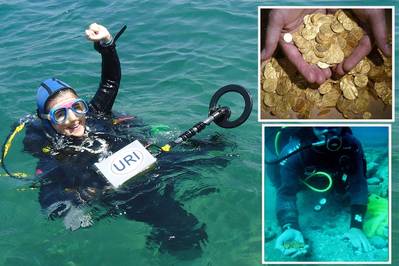 Scuba divers have found the largest cache of gold coins ever discovered in Israel working on wreck site in the ancient harbor of Caesarea on the country's Mediterranean coast, reports the Israeli Antiquities Authority (IAA). The treasure trove of 2,000 coins weighs more than 20 pounds and dates back more than 1,000 years to the era of Fatimid Caliphate, which ruled much of the Middle East and North Africa from 909 to 1171. The coins are described as “priceless.”
“It is probably the shipwreck of an official treasury boat which was on its way to the central government in Egypt with collected taxes,” said IAA director of marine archaeology Kobi Sharvit. “Perhaps the treasure was meant to pay the salaries of the Fatimid military that was stationed in Caesarea to protect the city.”
Also commenting on the discovery was Bridget Buxton, University of Rhode Island’s Associate Professor of Ancient History and Mediterranean Archeology. “In 2011 we received a small grant to purchase a JW Fishers Pulse 8X metal detector to assist in archaeological work I was doing with the Israel Antiquities Authority. Buxton, an accomplished scuba diver, worked with IAA’s Jacob Sharvit to investigate several of the country’s known shipwrecks, and to locate undiscovered sites. One wreck that was uncovered appeared to be the remains of a famous lost warship from the Napoleonic siege of Acre in 1799, a wreck that historians have been trying to find for the last 50 years. Using their Pulse 8X metal detector the team located large copper nails, cannon balls, grapples, 18th century muskets and other concretions.
"When the project ended, I left the detector with the antiquities authority,” Buxton said. “When IAA divers got on the scene of this most recent discovery, they were using the Pulse 8X to locate and recover the bulk of the 2,000 gold coins. This July I’m going back to Caesarea to put together an expedition to find more shipwrecks and a neolithic buried city we believe to be in the same area the gold coins were found.”
“Finding shipwrecks is much easier than securing funding for projects. Going out looking for extremely rare and valuable things, that may or may not be there, is the riskiest thing you can do in archaeology. It’s too risky for most grant giving agencies. So we’re dependent on donors with long term vision and entrepreneurial mindset.”
Buxton added, “One thing is for certain; the URI students that shared this experience, were transformed by it. Some of them have already used their projects in Israel to compete successfully for national scholarships and take the first big steps in their academic careers. I hope to find a way to bring all of them back to continue their research with our Crusades field school students this year. Last year we found Crusader gold at Akko with the help of the Pulse 8X.”
Another University with an active underwater archaeology program is Indiana University (IU) Bloomington. They have one of the oldest academic diving programs in the country. Professor Charles Beeker is the director of the school’s Office of Underwater Science and Educational Resources (USER) and also a member of the Marine Protected Areas Federal Advisory Committee, part of NOAA. He has directed numerous shipwreck projects in the US and Caribbean and is a pioneer in preserving wreck sites as underwater museums. In addition to his extensive knowledge and experience in the history behind these submerged time capsules, he is also an accomplished diver.
One of the more recent projects in Indiana’s archaeology program is the wreck of the Quedagh Merchant. The ship was reportedly captained by the pirate William Kidd as he raced to New York in ill-fated attempt to clear his name. The ship went down in 1669 off the coast of the Dominican Republic and the wreckage now lies in 10 feet of warm, clear Caribbean water, with cannons and anchors scattered about in plain view. According to Beeker, it is a unique example of 17th century ship construction. The location makes it ideal for in-depth archaeological study and the perfect place for students to put into practice the methods and techniques learned in the classroom. “How you put a name on a shipwreck is through scientific research, analysis of wood samples, determining composition of the ballast stones and the type of ship construction,” the professor said.
USER follows a multidisciplinary approach to underwater research drawing in students from six university departments. Their facility has a 1,000 square foot lab with numerous water-filled tubs holding recovered artifacts, including 19th century china that was on its way to the California gold rush from Hong Kong, and hand-blown ale bottles from Germany. Two key pieces of equipment the group relies on to assist in locating artifacts are JW Fishers Pulse 8X hand-held underwater metal detector and PT-1 pinpointing magnetometer.
• Israel • University of Rhode Island • North Africa
Email