Lemon Sharks Go Back Home to Give Birth, Find Researchers 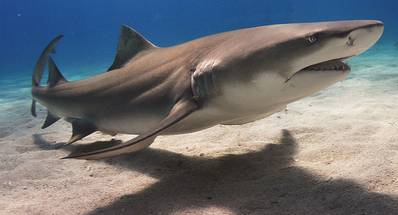 In the marine world, natal philopatry (animals returning to their own birthplace to give birth to their young) has been documented in salmon, seals, and some sea turtles; but for the first time, the phenomenon has been recognized in lemon sharks, researchers at the Field Museum in Chicago discover.

What is a lemon shark?
“A lemon shark is a large coastal shark, mainly found in the western Atlantic,” says Kevin Feldheim, A. Watson Armour III Manager of the Pritzker Laboratory for Molecular Systematics and Evolution at The Field Museum, who did his dissertation on these sharks.  “They are about as sharkey-looking as they come, and are called lemon sharks because their bellies are light, almost yellow, like a lemon.”

For the past 20 years, Field Museum scientists and collaborators in the Bahamas have been tracking female lemon sharks from birth through sexual maturity, and have found that some females do return to their birthplace to give birth to their pups.

Research
Each year, young sharks 0-2 years old, are collected and tagged using the same microchips that pet owners can place in their dogs.  The microchip acts as a collar of sorts, and can provide information about the identity and age of the animal.  In addition, a piece of the shark’s fin is taken for genetic analysis at the Pritzker Laboratory, right here at The Field Museum.

Using DNA from the fin, Field Museum scientists were able to create a database and determine family relationships, based on the similarity of the DNA sequences.

“We use a program that will create a parental pedigree for us, using the DNA of the newborn sharks,” said Feldheim.  “We can tell if a baby shark belongs to a female whose DNA is already in our database, and these relationships are confirmed by catching the animals.  For example, in 2008, we caught and tagged a pregnant female, and four years later, we caught several of her babies.”

“What is novel about our findings is that [lemon shark] nursery areas play a much stronger role in supporting local populations.  So, conservation of local populations needs to occur at a much finer scale (in addition to the needed larger regional scale)," concludes Feldheim.