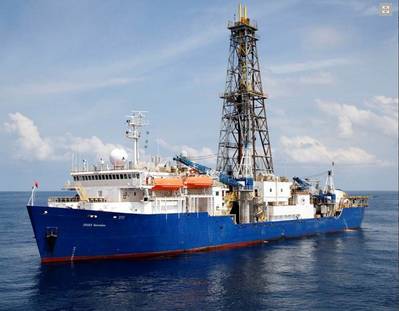 The National Science Board has authorized the National Science Foundation to enter into a cooperative agreement with Texas A&M University to continue managing the International Ocean Discovery Program (IODP) and operating its scientific research vessel  'JOIDES Resolution', considered a premier research vessel for deep-ocean drilling. The five-year agreement begins Oct. 14, 2014.

The new cooperative agreement with the NSF could be as high as $250 million, with the international community contributing another $87.5 million, subject to availability of funds and continued scientific priorities.

"JOIDES Resolution is a unique facility that allows dedicated scientists from around the world to access our planet's secrets that are buried beneath the seafloor.  Our continued operations will ensure that knowledge of Earth's processes will continue to grow and serve as an invaluable resource for future generations," said
Brad Clement, science services director of IODP.

"This is another homerun for Texas A&M – for Texas, economically and otherwise," said Texas A&M University System Chancellor John Sharp. "It puts us even more in the worldwide vanguard of scientific research, and I'm confident that the findings that come from this research can have far-reaching applications."

The International Ocean Discovery Program (IODP) and its predecessors have led scientific ocean drilling worldwide since 1968. Currently, IODP has 28 international partners, with Brazil joining as its newest member.

JOIDES Resolution is currently in dry dock in the Philippines, undergoing routine maintenance checks. It is expected to resume its schedule in January 2014 with an expedition to study the tectonics of the South China Sea.