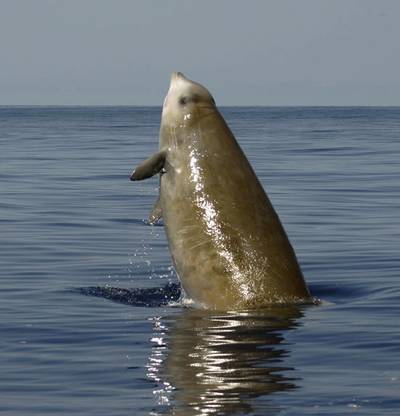 Cuvier's beaked whales seem to hold their breath longer than any other marine mammals: a satellite tag attached to one of them, swimming off the coast of California, recorded a dive to nearly 3km below the ocean surface that lasted 137 minutes, according to research reported in the journal Plos Biology.

The beaked whales, Cuvier’s beaked whale (Ziphius cavirostris, hereafter Ziphius) in particular, have exceptional diving capabilities. Though it is the most broadly distributed beaked whale species, they remain poorly understood, as their behavior, especially their preference for deep water habitat typically far from shore, makes them notoriously difficult to study.

To date, published dive data from Ziphius have come primarily from short-term data logging tags deployed in three different regions: the Ligurian Sea, Hawaii, and most recently Southern California. These deployments have averaged only 12 hr in length and in total represent less than 215 hrs and 327 dives

Despite their limitations, research data suggests that Ziphius routinely conduct some of the deepest and longest dives of any mammal, many of which exceed the estimated aerobic dive limit for the species by a factor of two or more. Ziphius also appear unusually sensitive to acoustic disturbance; it is the species most frequently stranded coincident with Mid-Frequency Active (MFA) sonar exposure during military exercises. Though it has generated a great deal of scientific interest, the causal relationship between these strandings and sonar remains elusive.

Field research work was funded by a grant to Cascadia Research Collective from the United States Navy (N45) via the Naval Postgraduate School, and other aspects of the research were sponsored elsewhere.