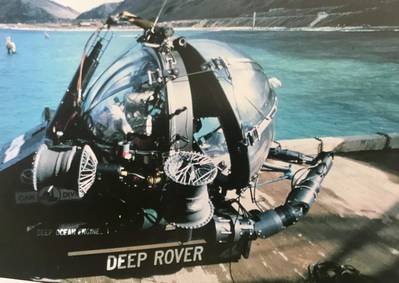 The 1980s (and into the 1990s) brought about advancements within submersibles used for scientific deep water research. According to the book Advances in Marine Technology, it was marine engineer and submarine Graham Hawkes, who “was recognized for designing approximately 70% of the manned submersibles” manufactured during that time. The book, as published by the Marine Technology Society, also notes that one of Hawkes’ inventions was “the Deep Rover, a battery-powered one-person acrylic bubble submersible equipped with robotic arms strong enough to handle construction yet sensitive enough to write or draw.”

It was through funding from the Canadian Government that Deep Rover was then launched in Nova Scotia by Hawkes and his co-collaborators Sylvia Earle and Phil Newton. Later, in 1985, Deep Rover “was used for its first scientific project off Monterey Canyon, during which Hawkes set a solo dive record of 3,000 feet,” according to the Marine Technology Society.
Marine Technology Reporter has been commissioned to publish the Official “Oceanology International 50th Anniversary Edition” which will distribute with the MARCH 2020 edition of MTR. For information on advertising in this edition, contact Rob Howard @ howard@marinelink.com, t: +1 561-732-4368; or Mike Kozlowski @ kozlowski@marinelink.com, +1-561-733-2477.
• Canadian Government • Marine Technology Society • Mike Kozlowski
Email

On December 23, an urgent inquiry was received from a Phoenix client requesting a proposal and timeline for a dive team to…