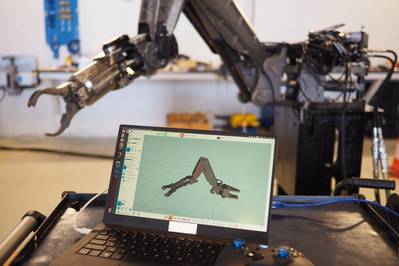 Olis, formerly BluHaptics, has created a next-generation software platform built from the ground up that expands the capabilities of pilot-controlled service robots in the energy and space sectors and other harsh operating environments. The firm's technology enables vast improvements in robotic dexterity, precision, efficiency and overall mission success.

“With the acquisition of leading-edge machine learning technology, we seized the opportunity to build ever-more powerful capabilities into our robotics software platform,” said Don Pickering, CEO of Olis Robotics. “Olis Robotics is the opposite of siloed technology, so we reversed the word into Olis. Instead of a singular siloed approach, we process a network of sensor data to extend the human senses of 3D vision, simulated-touch technology, and semi-autonomous movement and reactions.”

The recent name change from from BluHaptics to Olis Robotics also signifies the company’s evolution from the research and proof-of-concept phase to an applied commercialization phase, Pickering explained. Olis Robotics has won and currently maintains contracts with energy sector customers as well as with NASA and commercial space companies to enhance mission success.

“We’ve validated our technology by enhancing capabilities of robots operating in the most extreme environments,” Pickering said. “Our technology unlocks the ability for robots and sensors to conduct breakthrough work in offshore energy, nuclear decommissioning, environmental and health crises and in the infinite domain of space. Closer to home, our technology can be deployed for elder and disabled care, maintenance and service of bridges and buildings, and efficient inspection and repair of dams and other infrastructure.”