Swarm behavior of underwater vehicles has long been on the wish list. Couple that with collecting seismic data and you have an interesting challenge. The seismic industry has a track record for innovation – Blue Ocean Seismic Services is taking on the latest challenge.

Seismic data acquisition isn’t perhaps at the top of many lists when it comes to discussing innovation in the marine sector. Yet it’s been an area that’s seen leaps and bounds in innovation, from how the data is gathered to how it’s processed, helping to reduce uncertainty for oil and gas explorers and increase understanding of how reservoirs are performing through field life.

But now one of the latest innovations looks close to hitting the open seas. UK-based Blue Ocean Seismic Services, which only launched in 2019, just before the Coronavirus pandemic struck, has its goal set on commercializing self-locating ocean bottom seismic nodes to significantly reduce the time, cost and logistics footprint involved in seismic data acquisition.

Currently, ocean bottom nodes (OBNs), which contain hydrophones and geophones to pick up the seismic data reflected off the subsurface, have to be positioned using an ROV, or are deployed on a cable, which gets expensive and challenging in deeper waters. Instead, Blue Ocean Seismic Services’ nodes will be able to fly themselves to pre-set locations, wait to gather data, as a seismic shot vessel passes overhead, then lift off and move to the next location, and so on.

The 700mm-long nodes are being built to operate for three months at a time down to around 2,000 m deep, before needing to be retrieved for recharging, data recovery and any maintenance before redeployment, with their support vessel (a standard offshore support vessel) also acting as the shot vessel. 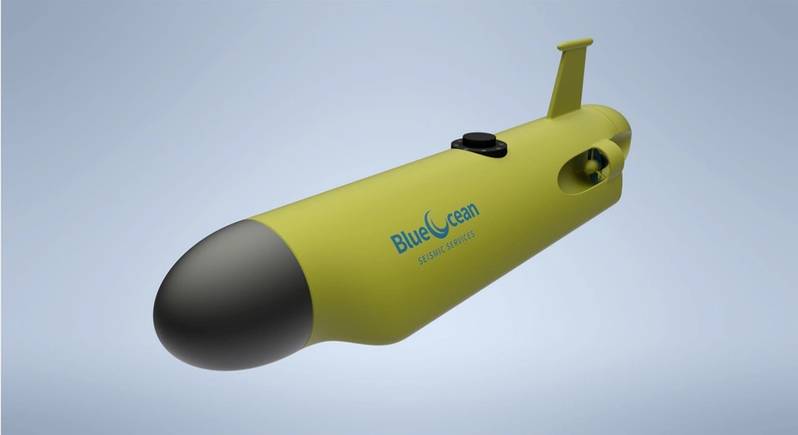 It’s a concept others have also been working on, but now Blue Ocean Seismic Services seems close to commercial reality, with pre-commercial trials planned for the North Sea and potentially the US Gulf of Mexico and off Australia next year. What’s more, the company wants to provide these services not just to oil and gas companies, but also those involved in offshore wind, where “useful low cost high density seismic will be a novel way of characterising the seabed sub-structure,” and carbon capture and storage (CCS).“We’ve customers wanting product before we’ve delivered it,” says Simon Illingworth, the company’s managing director and CEO, who says the concept could cut costs by 50-60%. “bp and Woodside want as soon as it’s available. It’s exciting technology. it’s substantially cheaper than traditional technology and a lot less carbon emissions, which is important now.”

Illingworth has a background in developing start-up technology companies. Born in the UK, he moved to Australia where he founded and sold computer software firm SmartTrack in the early 2000s. Illingworth went on to work in telecommunications, satellite tracking and then petrophysical data evaluation before co-founding Blue Ocean Monitoring, a Perth, Australia-based start-up, in 2014, with co-founder and chief technology officer Ben Hollings, whose background is in maritime robotics development. Blue Ocean Monitoring’s focus is using robotics and autonomous technologies to make data collection in the marine environment easier and with lower cost, risk to people and environmental footprint.

The team chose to have a small office in Perth, but its main base in Farnborough, a town west of London, to be close to its customers in London, but also due to access to suppliers and engineering talent in the area. Farnborough has a strong engineering heritage, having been home to the Royal Aircraft Establishment, a UK defense research group set up in the early 20th century (whose alumni include the likes of Geoffrey de Havilland of de Havilland and the Comet fame). Now, despite the pandemic and having only been running less than two years, the company has more than 35 staff, and growing, mostly in the UK. 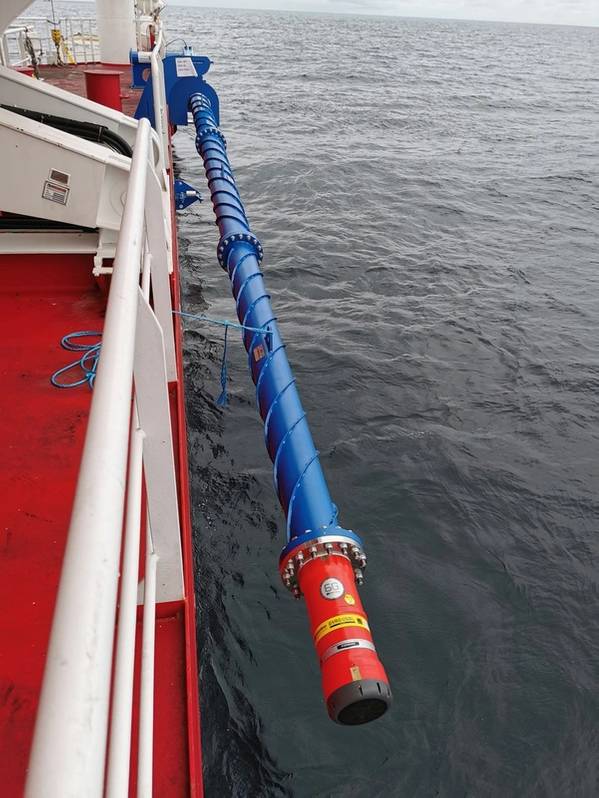 More importantly, having designed the vehicle, electronics, command and control itself, it’s now also chalked up some key system trials. Up until last year, work mostly focused on the OBNs and their buoyancy, to enable landing on the seabed. Late last year, in Australia, they tested the vehicle’s command and control systems, which have been built by the company, and swarm control, using acoustic positioning and communications, work. The latter have proven to be able to accurately position the nodes in deepwater to within 2m, Illingworth says. The “testbed ocean bottom seismic robotic vehicle” (or tOBSrV) successfully traversed a series of waypoints, while providing status updates to a master vessel. It logged flight and engineering data, which is being utilized for further systems development and optimization.Then, this year, off Blyth, on the UK’s North Sea east coast, it’s been testing coupling on the seabed – a critical element for gathering subsurface data. For a week, they repeatedly deployed six nodes, the pre-alpha nodes, as they’ve been called, and a traditional OBN, via a ship’s crane and an ROV, and compared the data.

“They were comparable,” says Illingworth. “We’re on a really good track now. We collected some really good seismic and engineering data, how stable they are on the seabed. Testing next year will be autonomous, they will be swarming themselves.” Next year will also see scale up, with the alpha prototype be tested “in the tens”, then pre-commercial nodes tested in hundreds.

“We’re going to have many of these on the seabed at any one time,” says Illingworth. It’s likely that crewed vessels of opportunity will be used initially, with the nodes deployed in their thousands via containerised systems that are as automated as possible and, because there are so many and they will be spread out over large areas, their acoustic positioning and communications will be supported by uncrewed surface vessels (USVs), as force multipliers.

Next year will also be about developing the launch and recovery system. Recovery is tricky, says Illingworth, but they’ve developed a technology for this, which includes being able to identify anything that’s not one of their nodes automatically and putting it back over the side. It’s currently not patented, so he couldn’t say more. Next year’s testing will be in the North Sea, probably also off northwest Australia at the end of Q2 and probably also in the US Gulf of Mexico.

The focus now, however, is building up the company with a goal to be running commercial operations in 2023-2024. “We’re now starting to build up an operations team,” says Illingworth, “transitioning from a technology company to an operating company and planning scale up manufacturing.” The next step is likely opening an operations office, to cover the North Sea, also an office in Houston, to support Gulf of Mexico, Mexico and Brazil, with an operations hub, probably in Louisiana, after that.

“The Gulf of Mexico is a very important part of future,” says Illingworth, especially as one of its key supporters, Woodside, is moving to merge with BHP, giving it more focus in that region. The key takeaway? Blue Ocean Seismic Services is one to watch in 2022. 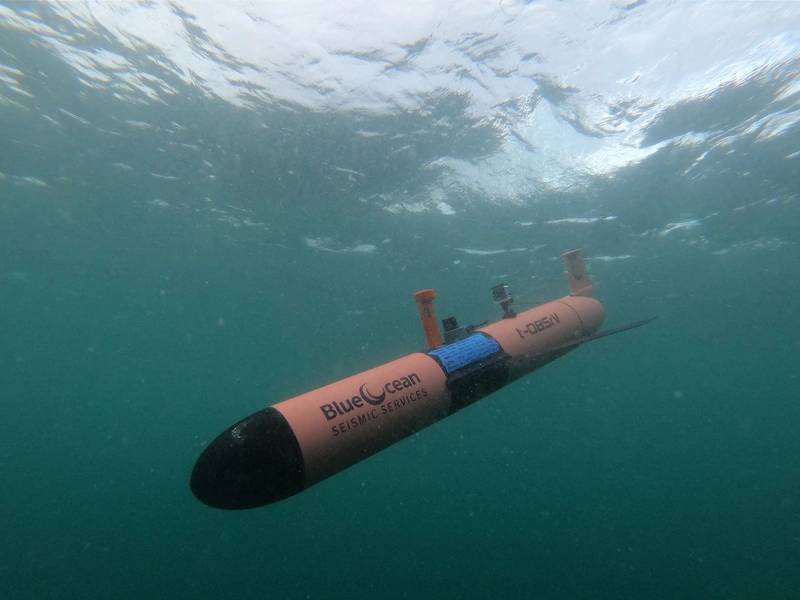 One of the latest node prototypes during trials. Image from Blue Ocean Seismic Services