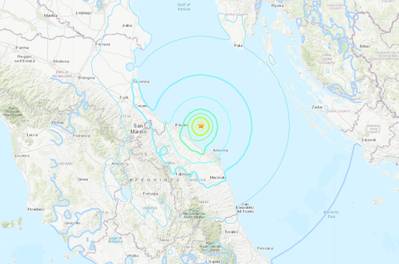 A strong earthquake of magnitude 5.7 struck off Italy's Adriatic coast early on Wednesday, but caused no serious damage or injuries but was felt as far away as Rome and northern parts of the country.

The quake, which occurred shortly after 7 a.m. (0600 GMT), was followed by more than 50 aftershocks of weaker intensity, the Italian Geophysics and Volcanology Institute (INGV) said.

Its epicentre was 35 kilometers (21.7 miles) offshore from Pesaro, a seaside city in the eastern Marche region, at a depth of 7 km, and was felt in Rome on the other side of the country and in the northern regions of Veneto, Friuli and Trentino.

A spokesman for Italy's Civil Protection told Reuters no one was injured, and the head of the Marche region, Francesco Acquaroli, said no major damage to buildings was reported.

"We are facing a series of tremors happening after the main one ... we are clearly all on alert," Acquaroli said at a news briefing.

Large parts of Italy are earthquake prone. In 2016, a 6.5-magnitude temblor - the strongest in 36 years - had its epicentre in Marche, causing destruction but no loss of lives.

As a precaution, schools in Pesaro and other nearby cities were closed in the wake of the earthquake, and rail traffic passing through Pesaro along the coast was temporarily suspended.

Railway lines were being gradually reopened after safety inspections by experts, Italy's railtrack company Rfi said on its website.

Prime Minister Giorgia Meloni was following developments from Rome, being "in constant contact" with Civil Protection authorities and the head of the Marche region, her office said.