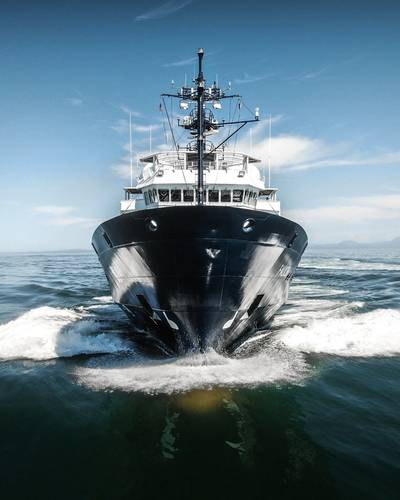 Founders Eric and Wendy Schmidt donate research vessel Falkor to Italy’s science agency to conduct ocean science in the Mediterranean and beyond.

The ship will be renamed to Gaia Blu.

Originally built in 1981 as a fishery protection vessel, the ship was acquired by Eric and Wendy Schmidt in 2009 when they founded Schmidt Ocean Institute. Following an extensive three-year refit, the ship was converted to the world’s first year-round philanthropic research vessel made available for free to scientists. To date, research vessel Falkor has embarked on 81 expeditions hosting 1,056 international scientists. The vessel has sailed a distance more than 12 times around the world and mapped over 1.3 million square kilometers of ocean floor. Expeditions on the vessel have led to numerous discoveries including a 500 meter tall coral reef in the Great Barrier Reef, stunning “gardens” of deep-sea corals off South Western Australia, and the collection of rare footage of the elusive glass octopus.

“After a decade of remarkable discoveries and scientific research with Schmidt Ocean Institute, we can imagine no better home for Falkor than CNR,” said Wendy Schmidt, co-founder of Schmidt Ocean Institute. “We are delighted they will continue Falkor’s legacy of exploring the ocean, supporting marine science and bringing the wonders of the ocean to the public.”

CNR has contributed greatly to marine research in the Mediterranean Sea, Atlantic Ocean, and polar regions; it is the largest research organization in Italy and includes 88 institutes distributed comunicato stampa across the country. The marine community of CNR is composed of over 450 people working in the Earth Systems Science and the Engineering and Informatics Departments.

“Receiving research vessel Falkor from Schmidt Ocean Institute is extremely beneficial for CNR and the entire Italian scientific community,” said Prof. Maria Chiara Carrozza, president of CNR. “This donation will foster collaboration with international research institutes and universities involved in studying the anthropogenically impacted Mediterranean basin, one of the cradles of human civilization. Falkor will also offer a unique opportunity to the Italian scientific community to work on the world’s ocean on a multi-year plan, within both European and other international
projects.”